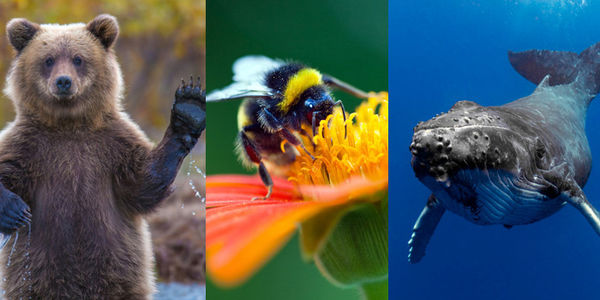 A vote for Trump is a vote against these animals

Dogs set on black bears, ripping them to shreds. Hunters marching into bears' homes and slaughtering bear cubs and wolf pups right in their own dens. This type of grotesque murder is sadistic and vicious — and it's something Donald Trump is all for.

Speak out and stand up for imperiled wild animals. Sign the pledge to vote against Donald Trump and for his rival Joe Biden!

Trump unleashed this cruelty just a few months ago in May 2020, when his hand-selected cabinet officials decided to trash Obama-era protections for the bears and fellow predators living in Alaska on national wildlife preserves. Already, these types of cold-blooded killings are underway. And they wouldn't have happened but for Trump.

And it's not just black bears who are in harm's way. Here are some of other major species that will actively be placed in danger if Trump is returned to the White House for a second term:


Some of the ways these animals are going to die — and, under Trump's watch, have already been dying — are excruciatingly gruesome. In addition to allowing hunters to brutalize black bears, Trump wants to let other wildlife be poisoned, drowned, and mangled to death. For example, while wolverines had only barely escaped extinction due to recent government protections, Trump and his cronies have rolled all those regulations back. Now trappers have free reign to trap, torture, and slowly, painfully poison these animals at their leisure.

If you love animals, there is no choice. Donald Trump must go. He's decided that it's either him or the animals. And we have to side with the voiceless, innocent beings he would imperil.

Demand that all animals and wildlife be given the proper protections they deserve! Become a voice for the bears, whales, bees, and countless other animals by committing to vote for Joe Biden for U.S. President this year!
Sign Petition
SHAREShare this petition with friends!TWEETEMAILEMBED
Sign Petition
See more petitions:
You have JavaScript disabled. Without it, our site might not function properly.