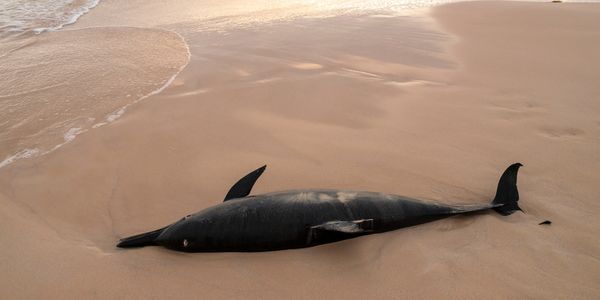 A Dolphin That Just Had a Baby Was Stabbed to Death, but the Killer Is Still at Large!

In March of this year, a bottlenose dolphin was found dead on a beach in Fort Myers, Florida. Any death of an animal is unfortunate, but the details of this case are especially disturbing: the dolphin appeared to have been violently stabbed to death. Even more sickening is the fact that this murdered dolphin was a lactating mother, meaning its young, vulnerable calf is now an orphan and will likely not survive on its own with no source of food, care, or protection.

Sign the petition now to demand local authorities do everything in their power to find who did this and make sure they are held accountable!

This is not an uncommon occurrence- -- in fact, in less than two decades, over 30 dolphins have been intentionally stabbed or shot in the Gulf of Mexico alone. Clearly, authorities need to do something to cut down on these horrific deaths.

Dolphins are remarkably smart and social creatures. Each dolphin has their own unique name, and research shows that dolphins lead very complex lives, socializing with their friends and forming bonds. They also, like many mammals, form deep attachments to their young. Imagine the heartbreak and shock when an autopsy revealed that this slaughtered dolphin had recently given birth. Whoever killed her could very well have ended two lives; who knows how long her baby will survive without her?

A $5,000 reward has been offered for anyone who helps lead to the arrest and conviction of the perpetrator. This is a good start, but it is not enough. There is no Florida law preventing whoever did this from owning an animal again, even if they are found and convicted. Research shows that when a person commits an act like this to one animal, they're likely to do it again to another in the future. Authorities must ensure that when the person who committed this atrocity is found, they can never own an animal again, and have their boating license revoked so they can't get near any wild aquatic animals ever again.

Florida must dedicate as many resources as possible to finding whoever perpetrated such senseless, cruel violence. And when the perpetrator is found, authorities must be intentional about the punishment that follows. Whoever committed this horrifying act must never be allowed to own an animal again and have their boating license revoked. Sign the petition now if you agree!

Care2
A Dolphin That Just Had a Baby Was Stabbed to Death, but the Killer Is Still at Large!
SHARETWEET