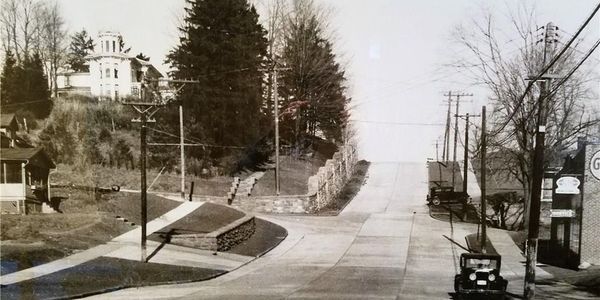 The undersigned petition the Mayor of Chagrin Falls, its Council, Boards, Commissions, and administrators to use all available means to preserve and protect Grove Hill, its WPA wall, and the Bancroft House and annex from any demolition, development, or excavation that is inconsistent with the Village's laws, ordinances, guidelines, and plans.

A developer has purchased the iconic property at the southwest corner of Main and Summit Streets (3 West Summit). He has proposed to:

The Bancroft House, built in 1878, is one of the oldest homes in the Village. Its accessory building, part of which dates from the 1880s, was occupied by well-known artists who painted portraits of some of Ohio's greatest citizens. The hill on which these structures sit, known as Grove Hill, is not only a Village gateway and one of its signature features, but itself contains an historic stone wall built in 1938 by the Works Progress Administration (WPA) that borders the Bancroft house property on both Main and Cottage streets.

As the Village's Design Guidelines summarize:

"The current residents of Chagrin Falls have inherited a livable, walkable and architecturally intriguing historic community. Many architects and developers have tried to recreate such communities with new construction, while other historic communities have lost their identity through lack of vigilance. This history and village lifestyle that define Chagrin Falls are a source of community pride and an increasingly rare legacy; one worthy of protection." (p. 6) (emphasis added)

To the undersigned, the Bancroft House, its accessory building, the WPA wall, and Grove Hill itself are part of the Village's special character, a source of community identification and civic pride, and rare examples of the Village's legacy. The developer's proposals, if implemented, will ruin iconic Grove Hill for future generations.

Even without demolition, the proposed, massive soil removal is inconsistent with the Village's mandate to protect Village environments – especially hillsides – from destruction; and it will put the Bancroft House, WPA wall, and surrounding properties at unwarranted risk from soil subsidence and other common and known problems previously caused by digging on Village hillsides.

Therefore, we the undersigned* oppose each of the developer's proposals and request that the Village, including its Mayor, Council, Boards, Commissions, and administrators act vigilantly and use all available means to deny variances, permits, or other allowances required for these proposals, and to preserve and protect the entire property at 3 West Summit, including the main house, accessory building, and the Village and private properties that surround it, including the WPA wall.