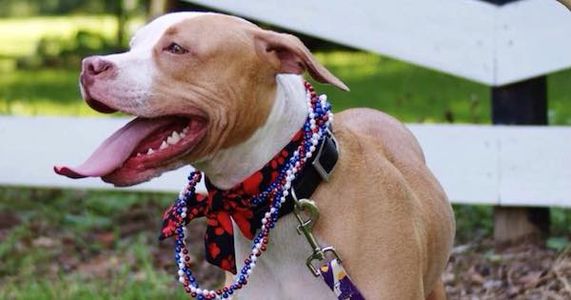 DEMAND BRAVEHEART'S ABUSER BE GIVEN THE UTMOST PUNISHMENT

Please sign to show your support for justice in the abuse of the puppy Braveheart and to let the judicial system know we will no longer tolerate this kind of behavior. Be Their Voice!

This little Pit puppy was about 4 months old when he was found on 9/11/13, in a storage building chained to a car with no food or water. The daily temperatures at that time in Shreveport La were reaching close to100 degrees. This was not a climate controled unit but instead a metal building with concrete floors and no ventilation. The unit was entered by the owner due to lack of payment by the renter of the storage building. When this picture was taken, they thought he was dead and only realized he was alive when they went to remove his body and he blinked. He was only hours if not minutes from death as he could only move his eyes. He was rushed to the vet and somehow survived. Someone that played a critical role in his recovery stated "human hands did this, human hands should fix it". He was given life saving medical care immediately and a miracle happened, he began healing. He was named.......Braveheart.

After a 2 week stay at the ER clinic he came to stay with our family. He only weighed 8 pounds when he was found. He has since gained 35 pounds in 5 months. We often foster critical care dogs since my wife is a vet tech and takes our fosters with her to work so they essentially have round the clock care. Braveheart's recovery was closely monitored and his health care was very aggressive. He was given the best of everything.

There was an unnecessary custody battle with animal control when they were asked to start an investigation into the abuse/neglect of Braveheart by public outcry. It was quickly won, again by public outcry. Gabriel Lee was also identified as his abuser and charged with felony cruelty to an animal. We formally adopted Braveheart from Caddo Parish Animal Shelter after his abuser surrendered ownership. He has been assigned legal counsel and we have been attending his court dates. He has plead not guilty and the ADA has informed both the judge and defense there will be NO plea deals. The judge has also agreed to a sentencing hearing if he pleads guilty. This type of abuse to any animal with no meaningful penalty needs to be stopped.

Braveheart is now doing great and has made nearly a full recovery. He still has some emotional scars that may never go away, but overall, he knows he is safe now. He knows he is loved now. You can see his whole story at https://m.facebook.com/AVoiceForBraveheart. He is still supported by TSR La Baby Mommas rescue in Shreveport La and attends events to promote "Adopt, don't shop", spay/neuter programs, pet education and animal abuse awareness. Although Brave was originally intended to be a foster, we knew differently after he was suddenly taken from us during the custody battle. We knew immediately when we got him back, we would never let him leave our home. He is a part of our family and he has found his forever home. ~ Bo

"Man [is] a rational animal, endowed by nature with rights and with an innate sense of justice." ~Thomas Jefferson~

There are laws in place that were created so that our civility and humanity are enforced and protected.

If a person can conduct themselves within the realm of pure torture, and with complete disregard for life and lack of concern for any kind of punishment, then will that person continue to grow with strength and confidence that they are above our laws?

Many FBI and psychological studies prove this to be the exact path that makes for child molesters, murders and serial killers. We, as a nation, and evident in this petition, (the world) are demanding simply that the laws be upheld that were written to prevent such torture and death of a living creature.

We ask that the court look at the severity of torture, in which this dog was locked away in a metal storage facility in the sweltering heat without food or water and chained to a car to prevent any possible escape. This act lead to suffering, starvation and shutting down of organs, one by one, as Braveheart died a little each and every day for weeks.

The individual who maliciously perpetrated this torture for over a month (which is around 720 hours) should face the maximum sentence for this felony. When a person continues down a path like this it is fathomable that the next possible victim will be human.

Care2
DEMAND BRAVEHEART'S ABUSER BE GIVEN THE UTMOST PUNISHMENT
SHARETWEET