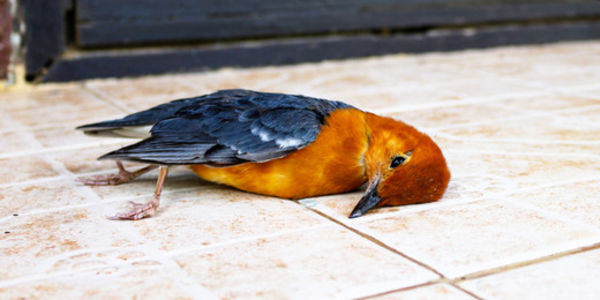 You're working in an office space, minding your own business when suddenly you hear it — that unmistakable crash against the glass side of the building. Yet another bird on its journey to find food or migrate with the seasons has mistaken the reflective walls of your office building for free, open sky. So with full force, it flew directly — smash — right into the glass.

Its crushed face shows the tragedy of this impact as the little bird falls away, dead, to the ground below.

More than 600 million birds — possibly as many as 1 billion — die from collisions with glass-sided buildings every single year in the U.S. But there are ways to tweak these buildings and make their exteriors "bird-friendly." And each and every city should mandate that developers make these changes now.

Sign the petition to demand that several of the largest cities in the United States — including Boston, Los Angeles, Chicago, San Francisco, and Houston — pass "bird-friendly" glass building ordinances!

Luckily one major metropolitan area, New York City, is already leading the charge. The city sits squarely within a migration path for birdies, and as many as 200,000 birds die in just this one city from glass building impacts each year. In December 2020, New York implemented a new law to save these avian creatures' lives by making their buildings safer. Office places will now need to use patterned glass to indicate to birds that their walls are indeed solid material, or use other safe deterrence systems.

In California, the town home to many of Silicon Valley's tech companies — Mountain View — has also taken a leadership role by requiring new or altered buildings to incorporate bird-friendly or bird-deterrent materials.

But we can't stop with just the Big Apple and Mountain View. These ordinances could save hundreds of millions of lives. They must be put into place now.

Urge lawmakers and mayors in Boston, Los Angeles, Chicago, San Francisco, and Houston to pass legislation requiring buildings to become "bird-friendly"!
Sign Petition
SHAREShare With FriendsTWEETEMAILEMBED
Sign Petition
See more petitions:
You have JavaScript disabled. Without it, our site might not function properly.