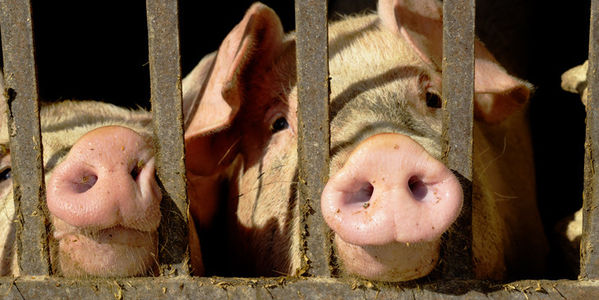 Shipping animals like cargo just to be slaughtered upon arrival is utterly cruel. Tell the EU to ban it now!

In December 2020, England and Wales took an unprecedented step: their leaders chose to put animal welfare first by banning the export of live animals for slaughter abroad. This news is momentous. Not only are these the only two countries in all of Europe to have passed such a measure — but they're also two of the only countries in the entire world that have taken such a strong stance in defense of these animals.

Sign the petition to demand that the European Union (EU) step up and pass a similar ban now!

Exporting live farm animals is far more gruesome than its benign name suggests. In forcing confused, powerless, and soon-to-be-executed animals to undertake these journeys, their handlers subject them to heartbreaking conditions. Animals are corralled and often beaten to force them to go along with their captors, grabbed and dragged by their legs or heads.

Then, for their long journeys, they are tied up or locked into extremely tight-fitting metal cages. Staff shove animals onto ships or train cars with poor ventilation that reach extreme temperatures, leaving these creatures to endure obscene levels of heat or cold. They will be confined in these conditions for the duration of the trek — often multiple weeks at a time.

Inevitably, many of these beings die during transit. For those that manage to survive, a different death awaits them at the slaughtering house.

British leaders say they decided to ban these types of horrendous live animal exports in the wake of Brexit, as the UK seeks to determine its future agricultural regulations. As government members said, their intention is to "strengthen the UK's position as a world leader on animal welfare" by "ensur[ing] that animals are spared stress prior to slaughter."

This is a huge step towards more humane farming practices, and it must be replicated elsewhere. The European Union has been considering similar legislation for years, but has yet to actually implement any such ban. The fact that England and Wales are taking this step proves it can be done. The EU must show it cares about animals as well!

Tell EU leaders to immediately pass and implement a ban on live animal exports!
Sign Petition
SHAREShare With FriendsTWEETEMAILEMBED
Sign Petition
See more petitions:
You have JavaScript disabled. Without it, our site might not function properly.

Care2
Shipping animals like cargo just to be slaughtered upon arrival is utterly cruel. Tell the EU to ban it now!
SHARETWEET