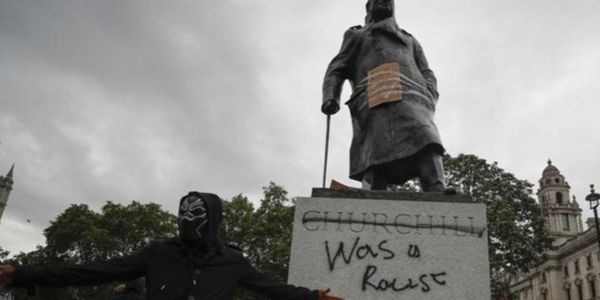 Bring Down Westminster's Churchill: End the Celebration of Racism and Genocide

In the wake of the horrendous murder of George Floyd, criticism from activists has fallen upon the many British statues erected to celebrate the achievements of slave owners, colonial murderers and self-professed racists, with special attention given to the infamously hateful Winston Churchill and his memorial in Parliament Square, Westminster.
Churchill was the imperialist leader of the UK throughout most of WW2, and is often credited with leading the allies to victory in 1945 within the British media, despite this narrative being inaccurate. Understandably, many praise Churchill for his role in defeating fascism in Germany, and respect such monuments dedicated to him. However, Churchill's menacing record on racism and colonial murder is completely overlooked by a hyper-nationalistic historicism that seeks to hyperbolically praise his military tactics and ignore his role in the British Empire.
In 1905, Churchill was appointed Under-Secretary of State for the Colonies, a position that he requested himself, due to his avid admiration of physicist Fredrick Lindemann, who regarded colonial subjects as slaves whose only reason for existence was the service of racial superiors. He then became Secretary in 1921, using his power to maintain British suppression of its stolen land, including supporting and enabling early occupations of Palestine, and campaigning for a Jewish state that could employ violent tactics of s despite publishing articles that promoted anti-Semitic 'Jewish-Bolshevism' in 1920. The UN has suggested that 5 million Palestinians have been murdered as a direct result of Israeli occupation and terrorism, with further millions displaced.
Churchill's support for the murder and displacement of people by imperial powers did not stop there: he once explained that "I do not admit for instance that a great wrong has been done to the Red Indians of America or the black people of Australia. I do not admit that a wrong has been to those people by the fact that a stronger race, a higher-grade race or at any rate a more worldly-wise race, to put it that way, has come in and taken their place", implying that the white Europeans who used genocide to clear occupied land were morally obliged to do so because they are racially superior. Churchill has been quoted supporting racism and genocide at many other points. During the 1920 Iraqi revolt, he used his political position to advocate for the use of chemical warfare, stating that: "I am strongly in favour of using poisoned gas against uncivilised tribes". He also referred to the Chinese as a 'barbaric nation'.
However, the worst of Churchill's racism was directed towards India, with Churchill saying that he 'hated' Indians, believing them to be a "beastly people with a beastly religion". As a result, during the Bengal Famine of 1943, Churchill diverted supplies from the millions of starving Bengalese people to futile stockpiles, encouraging other nations such as Canada to do the same. Journalists and newspapers in India were censored; banned from publishing images of starving a dying people. Rice was still exported to the UK and our trade partners during the famine, which is a clear and blatant disregard for the lives of Indian people. As a result of Churchill's determination to punish India, 3 million people are believed to have starved to death.
Though this certainly isn't even the tip of Churchill's icily murderous iceberg of racism, the evidence provided is reason enough for the narrative on Churchill to be changed. Churchill undeniably supported colonialism and the violent subjugation of African and Asian people, an all too common worldview that is directly responsible for the majority of issues surrounding race in the modern West. It is futile for us to campaign for racist police officers to be held accountable when we as a nation have refused to acknowledge the role of one of our most celebrated in structural racism. By ceasing Churchill's overt celebration, we can change the historical narrative from one that praises a racist to one that evaluates a person's racist flaws, and begin to hold racism accountable for the destructive nature that it is in British society. We cannot address our current inequalities without learning from the past, and the fact that Churchill is presented to children as a faultless hero is endemic of Britain's colonised education system, and in order to create a more tolerant society for all we must speak up against the powerful structures of hate.
Churchill's statue in Westminster is of extreme symbolic importance. The statue of a racist murderer looming over Parliament implies that, despite slight progressions in British society, the horrific beliefs and structurally racist institutions of our country are set in stone; sculpted like a statue and left to cast an immovable shadow over British politics and the structure of our society. His monument is a reminder that we are a country hellbent on denying our role in the extreme racism we protest against today, and, considering the Churchill openly believed that black and brown lives do not matter, it is an extremely disrespectful insult to victims of racism in the UK today.
Now that the convicted fascist hooligan 'Tommy Robinson' is planning to protest the Black Lives Matter movement outside this statue, it has been cemented as a symbol of racist beliefs, and must therefore be removed to show support to victims of racism everywhere and to begin to address our country's abhorrent crimes during its empirical days.
Sign Petition
SHAREShare this petition with friends!TWEETEMAILEMBED
Sign Petition
See more petitions:
You have JavaScript disabled. Without it, our site might not function properly.

Care2
Bring Down Westminster's Churchill: End the Celebration of Racism and Genocide
SHARETWEET