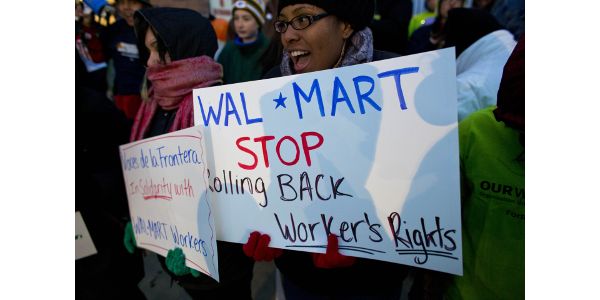 Wal-Mart: Stop Union-Busting and Treat Your Employees With Respect!

Even after working at Wal-Mart for three years, Jennifer McLaughlin earns just $16,800 each year. Jennifer is considered well-paid for a Wal-Mart employee, though she struggles to care for her one-year-old son.

But Wal-Mart is the world's largest retailer, raking in over $470 billion in annual sales. They have the money and the resources to treat their workers much, much better. Instead, the company is notorious for low pay, understaffing and poor benefits. Wal-Mart is currently fending off lawsuits in multiple states for violating labors laws, including equal pay and wage-and-hour laws.

Workers like Jennifer know that it just doesn't add up — "They're on top of the Fortune 500, and I can't get health insurance for my kid."

In response, workers hope to unionize, demanding better wages and working conditions. But unsurprisingly, Wal-Mart is fighting back — and at times against federal labor law. From bullying workers to confiscating union literature, the company has even gone as far as firing pro-union workers.

In blatant violation of workers' rights, Wal-Mart is a force to be reckoned with. That's why we need to stand up together in opposition to Wal-Mart's union-busting. Hard workers like Jennifer deserve to receive better wages and benefits to support their children.

Please take action for workers like Jennifer. Demand that Wal-Mart respect their employees and welcome a union to ensure workers' rights are upheld.

I find it disgraceful that Wal-Mart pays such low wages, poor benefits and continuously disrespects workers' rights. Meanwhile, the company boasts over $470 billion in sales and your revenues account for 2% of the entire U.S. domestic product. Clearly your company has the means to treat your employees much better. Instead, employees like Jennifer struggle to care for their children.

A union would provide the necessary power for workers' to keep the company in check. Not only should your company do better when it comes to wages and staffing, but workers should be able to unionize so that they can demand that you do so. That's why I'm standing on the side of Wal-Mart employees looking to form a union.