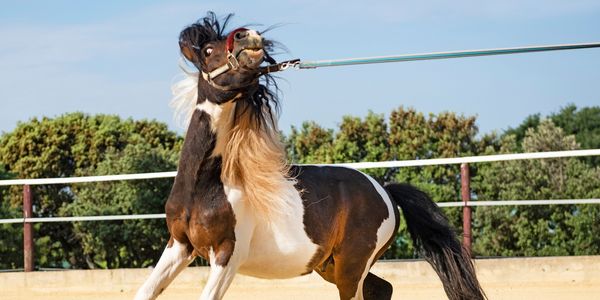 A horse trainer near Portland, Oregon was arrested after an anonymous tip of allegations of violent, terrifying abuse was made to local police. The details of the case were gruesome: the woman allegedly deprived the animals of food and water and maliciously beat them. But the owner of the farm the trainer worked at has repeatedly made statements excusing her behavior, and clearly knew that she was using torturous, problematic methods. Arresting the perpetrator is the first step, and now White Birch Farm must now be held accountable.

The stories of what occurred at White Birch Farm are harrowing. In one video, a horse is bridled so tightly to the saddle that it appears to be struggling to breathe -- its eyes look glossy, beginning to roll back into its head. In another part of the witness affidavit, the accused trainer allegedly described taking a miniature horse's head and slamming it into the wall to intentionally inflict pain.

Local police charged the accused woman with a whopping 20 counts of animal cruelty: two counts of failing to provide proper drink, two counts of overworking, nine counts of torture, and seven counts of mutilating or cruelly beating or unjustifiably injuring an animal. That many counts of cruelty indicates long term and repeated abuse of many animals. How could the institution who employed her not know that all of this is happening?

The reality is that it's almost impossible White Birch Farm didn't know the accused woman was engaging in these behaviors. In fact, when asked about the abuse, the owner replied, "you needed to have a specific training philosophy to understand the training methods used by her," according to the warrant. In other words, the owner was literally claiming that abusive methods are simply a difference of philosophy, and not an objectively morally wrong thing to do to any animal in any circumstance.

Oregon's Animal Control Unit must investigate and shut down White Birch Farm, as they clearly are fine with allowing horses on the premises to endure extreme and dangerous abuse. These poor horses should be relocated to a safe environment where they can receive the love and care they deserve. Sign the petition now if you agree!