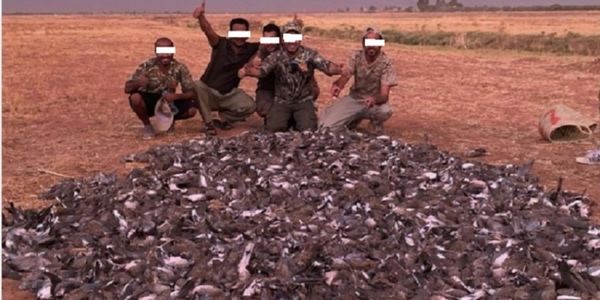 According to Bergier & Thévenot 2006, there are 454 species of birds in Morocco. Of these, 156 are considered to be rare or accidental and fifteen are globally threatened, among them is the Turtle Dove, a migratory bird species with a southern Palearctic range covering most of Europe and North Africa.

Recently, Gulf Arabs who came to Morocco as part of an organized trip by a travel agency for hunting enthusiasts published photos and videos of their booty on the Instagram photo-sharing site, boasting about the outcome of their morning sniping tour, and overthrowing more than 1,490 fowl. "Turtle Dove" commented, "Whoever will say that this is an extravagance that honors us with his silence," one of them pointed out that the hunted birds will be taken to their countries Saudi Arabia and Kuwait, and distributed equally to the fishermen involved in the process.

Hundreds of Moroccans condemned the "environmental and animal crime" carried out by these foreign fishermen, in the absence of any interference from the responsible authorities, as citizens and civil society actors in the region, through their accounts on social networking sites, expressed dissatisfaction with what is "an explicit violation of the laws regulating Hunting "and" a threat to the Moroccan livestock ", pointing to the" idleness "and" corruption "experienced by these Gulfs in the Haouz region, which the responsible authorities were supposed to prevent.

That "over-hunting" by foreign hunters' groups is not limited to the Turtle dove but also targets some species of songbirds, which top the list of distinct biodiversity. The Kingdom is considered an essential component of the ecosystem and a great indicator of the integrity of the environment and its absence from all manifestations of imbalance.

For their part, the pioneers of the exchange site "Instagram", through their comments on the video documented the process of fishing, the need to impose strict restrictions on external fishing trips, and the establishment of monitoring committees in order to accompany their fishermen, taking care to respect the quotas and species allowed to catch, Given their violations poses a significant threat to the Moroccan livestock and its diversity.

Please sign this petition to pressure the Moroccan Government to protect this beautiful and rare bird on a global level and to prevent this unjust sniping that depletes our animal wealth.