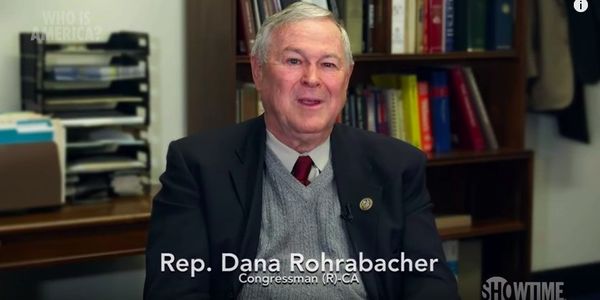 It's Time to Resign, Congressman Rohrabacher

Most people already knew Congressman Dana Rohrabacher was a punk, but until you see him getting punked himself, you might not realize just how dangerous he really is.

In "Who is America?" Cohen disguises himself as Col. Erran Morad, a former Israeli commando who has come to the States to help save our school children from gun violence. But he didn't come to take our guns; rather he wants to put more and more of the deadly tools into the hands of kids.

Gun-crazed activists and politicians are duped when Morad ask them to participate in a PSA for a program that would put guns in the hands of children as young as four. The video opens with Rohrabacher saying, "Maybe having young people trained and understand how to defend themselves in their school might actually make us safer here," and then cuts to him reading a script in which he makes further arguments for this proposed "toddler-with-guns" plan.

Rohrabacher, a fifteen-term congressman, has been serving the 48th district of California disgracefully for thirty years. But only recently are voters able to see the abject disgrace this feckless politician has brought to Congress over that time. The above quotes are as nonsensical as they are depressing. Not only did Rohrabacher , a seasoned politician, fail to do his due diligence before holding an interview with Cohen, but he was also happy to support a program so dangerous that, if it were were realized, would have likely led to the death of hundreds of innocent people.

Congressman Rohrabacher is considered Russia's biggest proponent after Trump in Washington D.C — so much so in fact that his nickname is "Putin's Favorite Congressman." He has also used his platform to support discriminating against gays and vilifying immigrants.

Rohrabacher is a political dinosaur best suited for a museum than Capitol Hill. His ideas are dangerous, racist, homophobic and looney and having him in office one more term would further degrade our political system.

It is time Congressman Rohrabacher bow out of national politics and resign. Sign this petition if you agree.
Sign Petition
SHAREShare this petition with friends!TWEETEMAILEMBED
Sign Petition
See more petitions:
You have JavaScript disabled. Without it, our site might not function properly.