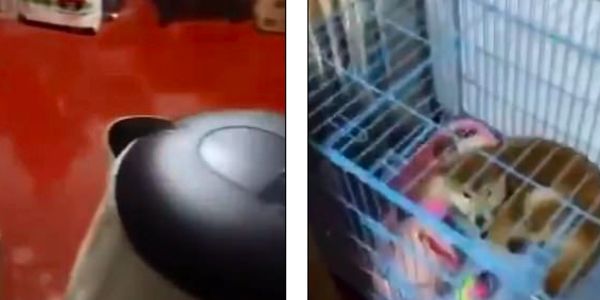 He Poured Boiling Water On Strawberry, A Caged Dog!

Strawberry is a darling Shiba Inu. Strawberry is also the victim of a horrible violent crime by its owner. Chen poured boiling water on the cages pup to punish the animal for defecating in his bedroom and filmed the whole thing. This is animal abuse, clear and simple, and should be treated as such.

Sign now to demand Chinese authorities charge Chen with animal abuse and punish him to the full extent of the law.

Chen filmed the incident, trying to "showoff" how he punished Strawberry while Strawberry cried out in pain. He also filmed himself beating Strawberry with an iron stick. Strawberry doesn't fight back, but just cowers and cries in the corner while suffering this beating. Now it's coming out that there may have been a cover up, the dog who authorities rescued had no burn marks from the beating earlier in the day and was clean despite a horribly dirty cage, so it's believed Chen swapped out the dog in order to avoid punishment. So now we have no idea where the real Strawberry is and whether the sweet animal is still suffering.

Everyone who has ever had a dog knows that if a dog goes to the bathroom in the house, it is always the human's fault. Either the human has not let the animal have access to the outdoors enough or the human never properly took the time to train the animal. Either way, this is something that happens during training and occasionaly later and not a reason to punish an animal.

Not to mention, punishing an animal with violence is never acceptable. Especially when it's done more than a few seconds after the animal did something. Dogs can't connect action with consequence the way we can over time, if they don't get feedback within seconds on doing something, they don't know why you're doing that. So punishing an animal for defecating once it's back in its cage later is not only cruel and abusive, it is inneffective and stupid.

This is obviously a person who shouldn't own an animal at all. He was an intern doctor at a local burn unit and honestly, a person who tortures an animal like this should really not be trusted to care for humans. Luckily, the school agrees. They have suspended him and recommended medical treatment.

Sign now for justice for Strawberry in the form of actual punishment for its abuser!
Sign Petition
SHAREShare this petition with friends!TWEETEMAILEMBED
Sign Petition
See more petitions:
You have JavaScript disabled. Without it, our site might not function properly.