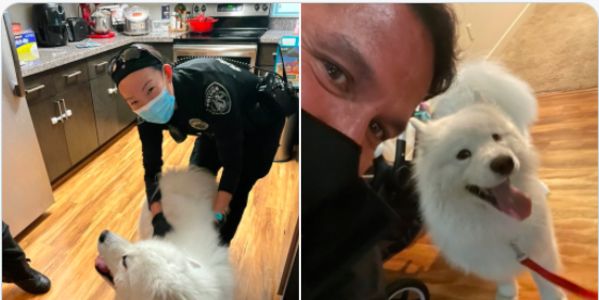 Man Caught Beating His Dog on Camera Identified, Make Sure He Never Owns an Animal Again

{Image from Bellevue, WA Police, who seized the dog}

A horrible video went viral the week of Thanksgiving in the United States. The video was captured by someone's doorbell surveillance video and showed a man exiting a car and then proceeding to beat a defenseless dog. The abuser has been identified and now we need to be sure he never has access to animals again.

Sign now if you want King County, Washington not to return this man's dog to him and prevent him from adopting another one ever again!

Animal abuse caught on camera is almost never the first time it's happened, it's usually just the first time someone was caught. That's likely the case here. The man exits the car and seemingly totally unprovoked, begins to whip his big fluffy white dog with its leash. Then, he shoves it up against a fence and beats it some more, seemingly while kneeling on it. This is not dog training, it's violent animal abuse.

If a person doesn't have the knowledge or patience to train an animal without hitting it, that person has no business owning an animal. Luckily, with help from the footage, the culprit has been identified and the beautiful dog has been taken into custody and received proper veterinary care. As you can see from this photo, the animal is clearly happy to be in safe hands for once.

However, we know how easy it is for this kind of case to slip through the cracks once people aren't paying attention anymore. That's where you come in!

Sign and share the petition to keep the spotlight on this abuser to make sure local authorities do not give him the dog back and prevent him from ever owning one again.