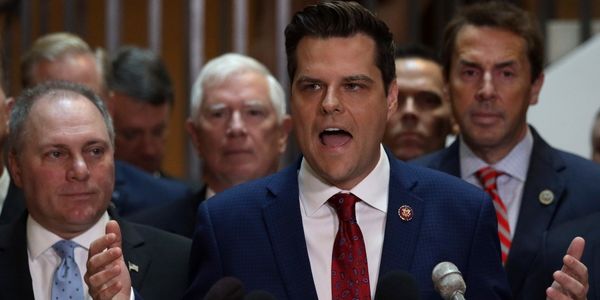 Prosecute Rep. Gaetz and his GOP cronies for jeopardizing national security for a childish stunt

When three dozen House Republicans stormed into the Sensitive Compartmented Information Facility (SCIF) in the US Capitol where three House committees were holding impeachment hearings, they weren't just making a mockery of democracy or due process, they were also brazenly violating very basic, very important national security regulations regarding the safety and security of America.

As Wired noted, "It should go without saying: Don't round up a bunch of your buddies and jostle your way into a highly secured government facility uninvited. But that's exactly what a group of Republican congressmen proudly did this morning."

Added legal scholar and former acting-Solicitor General Nel Katyal, "The stupidest thing someone can do is bring an electronic device (into the SCIF). You would lose your security clearance and may even face criminal prosecution."

SCIFs are basically "spy-proof" rooms designed to keep sensitive information secure and out of the hands of would-be snoops, hackers and adversarial geopolitical players like, oh, let's say, Russia. When you bully your way into said SCIF with your definitely-not-secure, run-of-the-mill smartphone in your pocket and bloviate on national TV for five hours about why you must be allowed in the room, you are inviting enemies and foes alike to join in the fun via a swift and convenient phone hack.

Demand that these renegade Members of Congress be investigated and held accountable for compromising basic tenets of US sovereignty and security. It's bad enough that the president thinks he's above the law, but for these two-bit Republican hack Representatives to violate the law with impunity is simply beyond the pale.

The impeachment inquiry currently underway is constitutionally sound and perfectly legal. House committees are entitled to conduct hearings in both public and private settings as they see fit. Not liking the process, or fearing its outcome, is not grounds for illegally upending security protocols and putting our nation at risk with stupid stunts.