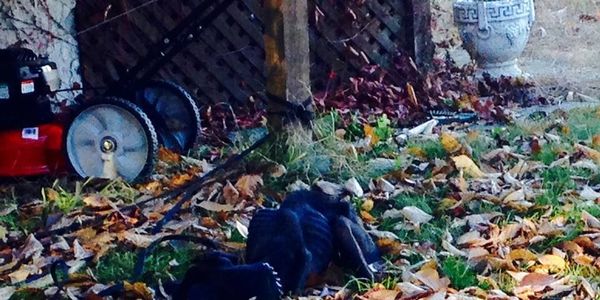 Please help us get justice for Jaida. This dog was thought to be dead, witnesses called the cops, but before they could arrive, the owner picked up the dog, carried to his car, and left with the dog. When police arrived they were informed about the dogs condition, but told the people they couldn't do anything about it, to call animal control. They then called animal control, and waited a week yet no response back. We were then notified, and we then notified many people, and animal control finally went and spoke with the witnesses, but never went to speak with this monster. (He returned home without Jaida)

Its now been 2 weeks since that date, and these people have brought home new puppy to starve to death. This should have been investigated weeks ago. Where did he take Jaida? They need to find out, and charge him, and get that new puppy out of his care. Please help us push animal control into ACTIVELY working on this case.
This could be a child next.

On Oct 31st, in the city of Scranton, there was a dog that was thought to be dead in a persons yard, tied out, and left

for dead. There were witnesses who called 911 to get the police there. Before they could arrive, this man removed the

dog, that he had to carry because she was too weak to even move, loaded her in his car, and drove off with her. The

police then arrived, but he was gone with Jaida. The police informed the callers that there was nothing they could do,

even though the callers had pictures, and his license plate number. They were instructed to contact animal control and

they were assured animal control would return their call. No call was ever returned.

On Nov 7th, after many failed attempts to contact animal control, a third party was called on to see if anything could be

done about this situation. We responded to their request, and started calling all local animal control, and humane

officers that we could find. The police station was also contacted to see if there were any reports about the call to

this location. We finally were successful in a visit from the animal control officer to one of the witnesses houses to

gather the pictures, and complaint. We thought we were finally going to find out where he took this poor dog, in the

hopes that we might find her and save her. That didnt happen.

Yesterday, Nov 23rd, over 2 weeks later, we were once again in touch with the witnesses and was told that animal control

has not been to this parties house as of yet, and they now have a new puppy. We will not except this. Why is animal

control dragging their feet on this case? Why did a dog have to suffer through starvation, and yet another dog is once

again in that very yard, to surely go through the same agonizing death? Why was this man not charged, and instructed to

report where he took this dogs body, while she was still breathing? We would like answers.

After some calls today, we managed to get animal control in contact with the witnesses once again. It was stated that

they will now go to this mans house and question him. We are asking for your help to see that this is followed through

this time. It has now been over three weeks, so there is no hope for Jaida, but in her name we may be able to save this

puppy. Could you please help us? It is a known fact, with statistics showing this to be fact, that any person that will

do this to a dog, can at some point turn this anger, and hate towards a child as well. That is a very scary thought to be

A facebook page has now been opened up for justice for Jaida, as well as letters to some news station asking them to

carry this story. We hope we can get this resolved in the quickest way possible. Jaida suffered a horrible death. Her

body shows that. It must be terrible to starve to death, and at the hands of someone that was to take care of her. Please

consider our cry out for help for this puppy, and through the course of this, we will be getting justice for Jaida. Thank