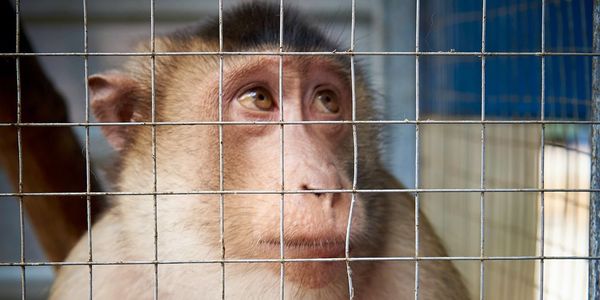 For centuries, academic research has been conducted at the expense of sentient, living things. Animals who are experimented on can fully experience pain, and yet universities around the world continue to expose these innocent creatures to harm and abuse in situations where other humane options are available – and even better, for the purposes of the research. For example, Johns Hopkins is under fire for abusing owls, monkeys, and a pig in recent experiments that are totally inappropriate and unnecessarily cruel for animal subjects.

The University recently put out a statement excusing animal abuse and pretending that animals are needed for the current research they are conducting. Their claim? That the animals were necessary for research on attention-deficit hyperactivity disorder (ADHD), schizophrenia, and autism. There is NO reason to subject innocent creatures -- who deserve vibrant, free lives without being poked and prodded at all day -- to these types of experiments. Animal experimentation is totally inappropriate for these realms of study.

A recent lawsuit filed by PETA alleges that one professor had conducted experiments on owls without a permit for years. Documents show that this researcher subjected owls to animal experiments for four years before the research was approved and given a formal scientific permit. This is a violation of the state of Maryland's anti-cruelty law -- and a big red flag about how Johns Hopkins deals with ethical concerns about the treatment of animals. In another horrifying allegation, the organization Stop Animal Exploitation Now! (SAEN) claimed that a pig being used for a cardiac study was so horribly injured that it had to be euthanized – even though, apparently, Johns Hopkins never referred the poor thing to a vet for medical care.

The time is long overdue for President Ronald Daniels to step in and end this research that abuses animals. We must protect the owls, monkeys, and pig involved –- every single animal deserves dignity and protection from abuse. Sign the petition now if you want Johns Hopkins to get on the right side of animal welfare, and shut down these experiments immediately!