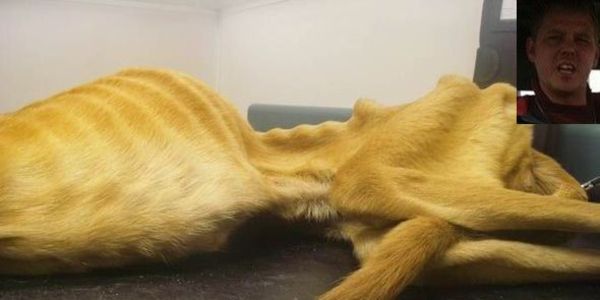 Dog left to starve to a skeleton

I am sure you will all be very disappointed and angry to learn that today, animal abuser David Lowe received a 12 weeks' suspended sentence, a £1,000 fine, and a ban on keeping animals for life. This is not justice for Fly, the beautiful Lurcher who he starved to death.

The UK Animal Welfare Act places a duty of care on people to ensure they provide for five welfare needs: a suitable environment; a suitable diet; the ability to exhibit normal behaviour patterns; to be housed with/apart from other animals as appropriate; and to be protected from pain, suffering, injury and disease. Lowe failed to seek the very necessary veterinary help with a tumour, diabetes and an abscess which would have saved Fly's life, and he starved Fly to a skeleton . A vet described it as the worst case of starvation he had ever seen.

Given the deliberate cruelty involved in this case, we have to wonder why Lowe did not receive a custodial sentence - particularly when the law states that those found guilty of animal cruelty can be sentenced to a maximum of 51 weeks in prison.

I will be writing to the Ministry of Justice to ask why the UK law has failed us yet again.

When 15-year-old Fly was discovered after a tip-off from neighbours, vet Angus McKenzie said Fly was the most severely emaciated dog he had seen either dead or alive in more than 30 years. She was dehydrated and rated zero on a ‘body condition scale’ - with a rating of one being classed as emaciated.  She was more than half the weight she should have been and was suffering from dental disease, a heart murmur and diabetes.

Her owner David Lowe (inset) had been given money by his former partner to take the dog to a vet, but Lowe didn’t bother. On discovery, Fly was immediately signed over to RSPCA care but because of her ‘cumulative conditions’, the only humane course was to put her to sleep. The vet said that the sad thing about the case is that individually, the conditions were all treatable and manageable had veterinary advice been sought at an earlier stage and acted upon.

Lowe has been found guilty of five counts of causing unnecessary suffering to an animal. The case has been adjourned until 21 May, so in the meantime, please urge Bolton magistrates court to pass a prison sentence for this horrendous crime.

Many thanks to Lee Gaskin for sharing this YouTube video tibute to Fly: http://youtu.be/r3ztZqsHcSY .

With relation to the above case, I attach a petition signed by 32,096 individuals who are calling on Bolton Magistrates Court to impose the maximum possible prison sentence of 51 weeks on David Lowe, and to ban him from owning animals in the future.

Earlier this year, Bolton Magistrates Court found Lowe guilty on five changes relating to animal cruelty, in what RSPCA inspector Vicki McDonald said was the most serious case of malnutrition she had ever seen. Vet Angus McKenzie added that in more than 30 years’ experience in the field of small animals, he had never seen a dog – dead or alive – as emaciated as the dog in question.

It is against the law to be cruel to an animal that is kept as a pet. Among the basic criteria for ensuring an animal is well cared for, it must have a proper diet and fresh water, and be treated for illness. Lowe failed to provide food or an adequate supply of drinking water, which resulted in severe dehydration. He was also found guilty of failing to provide veterinary care for the dog, which was found with an inflamed mammary tumour, a discharging abscess, and dental disease.

While the Animal Welfare Act 2006 makes it clear owners’ responsibilities for ensuring the welfare needs of their animals are met, time and again, courts are imposing lenient – or even suspended – prison sentences on very serious offenders.

This petition supports the views of the general public that sentences need to reflect the severity of the cases in order to deter future animal abusers.

Mel Crowther
Sign Petition
SHAREShare this petition with friends!TWEETEMAILEMBED
Sign Petition
See more petitions:
You have JavaScript disabled. Without it, our site might not function properly.

Care2
Dog left to starve to a skeleton
SHARETWEET