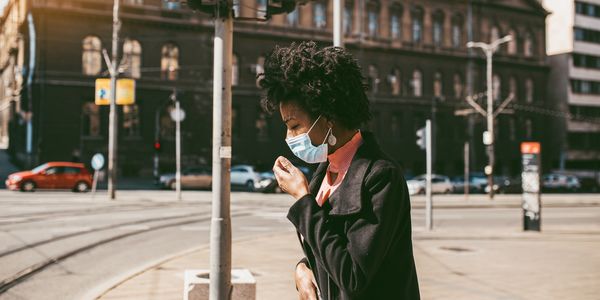 Back in March 2020, when the COVID-19 pandemic began to gain dangerous momentum, the Environmental Protect Agency (EPA) headed by Trump-croney Andrew Wheeler saw a nefarious opportunity -- the agency tasked with protecting our water, air, soil, and entire planet decided to stop policing major polluters. Claiming that the health risk of the pandemic made it harder to prevent the health risk of pollution poisoning people, the EPA announced that it wouldn't penalize businesses that failed to monitor or report pollution. Relying on the "good faith efforts" of industries that have lobbied for years to prioritize profit over environment and public health -- what could go wrong?

A study by doctoral students at American University discovered that something did go wrong -- across 700 counties tested, there was a 14% spike in the type of pollution called particulate matter. Evidence is emerging that particulate matter is tied to heightened risk of COVID-19 complications and death -- the American University study went as far as to suggest that there were "7,300 additional deaths from COVID-19" in a period of about three months after the EPA loosened its regulations.

Though the EPA ended its pollution free-for-all on August 31, previous regulations weren't even cutting it. Sign the petition and demand that Administrator Andrew Wheeler immediately set a lower, stricter standard for particulate matter pollution in the United States!

Particulate matter is the microscopic solid and liquid pollution that comes from anything that involves the burning of fossil fuels -- an industry that's rich, powerful, and holds magnificent sway over the EPA. When we breathe in air that is heavy-laden with this type of toxin, which too many areas of the world are, the particles burrow deep into our lungs. Sometimes the poison even reaches our blood stream. According to a research director at the Union of Concerned Scientists, it's "responsible for more deaths and sickness than any other air pollutant in the world."

We know beyond a shadow of a doubt that symptoms, complications, and risk of death are much more severe for other respiratory illnesses when pollution is also a factor. The mere possibility that the presence of particulate matter causes higher COVID-19 mortality rates should be all we need to cut down on that pollution immediately.

It must not be ignored that the highest pollution levels tend to be in lower income and BIPOC communities -- power plants, factories, highways, and other polluting projects are often thrust into these communities that can do very little to stop them. These are the same communities that have experienced heightened levels of COVID-19 deaths due to medical racism, among other deadly inequities. These already vulnerable folks will be the ones who suffer the most if the EPA does not act now.

But Trump's EPA has made no attempt to hide their loyalties, which are with the fossil fuel industry, not the American people. They have known for a long while now that particulate matter was a dangerous issue. There was even a panel of scientists that used to advise the EPA on the matter -- 26 scientists were needed to cover the immense amount of science related to the issue. But Andrew Wheeler dissolved the panel in 2018. The most deadly pollutant in the world, and the EPA doesn't think they need to know about it.

But that panel knew, even then, how important their expertise was. Even after being disbanded, almost all of the members penned a letter to Wheeler saying that "tightening the standard [for particulate matter emissions] would avoid tens of thousands of premature deaths per year."

Wheeler, who used to lobby for the coal industry, didn't listen then, nor is he listening now -- when there is a pandemic that violently attacks, mutilates, and disables the lungs. This is a matter of life or death. Sign the petition demanding that he finally pays attention, and sets a far stricter standard for particulate matter emissions!