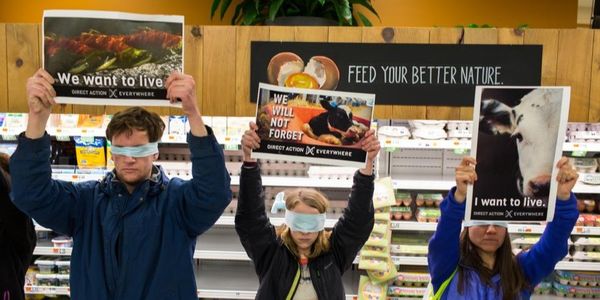 Animal Rights are important in the world. It's our duty to make animals happy and save them from suffering. Not only us, but there are lots of organizations out there to improve animal rights. However, recently, I discovered concerning movement from the organization called Direct Action Everywhere (DxE).

Direct Action Everywhere is an animal rights organization that works for "total animal liberation" and the creation of a law requiring "species equality." They started to work all over the world, and there are lots of branches of DxE. DxE even reached my country, South Korea, making a new branch called 'DxE- Seoul'.

However, according to my recent search about this organization, their protest tactic is nothing but disaster. I found lots of evidence about this.

Evidence 3 (this is my country)

Evidence 7 (this is my country)

Evidence 8 (this is my country)

There are lots of evidence on their official youtube page. I recommend seeing it yourself.

I support their movement of animal rights, but this is totally unacceptable.

Here's some reasons that DxE's protest tactic is unacceptable:

1. This is not a great protest for animal rights. Not only this is harassment, but also it's an obstruction of business. In the world today, the opinions of the people aren't the same. Some people agree while some people disagree. So, a good organization listens to both sides and makes sure the opinions of both sides are heard. However, DxE is proving that they're not listening to the other side, pushing and forcing their beliefs. Also, in my country, obstruction of business is a clear violation of the law, which can be punished by 5 years in prison or a fine of $12537.

2. This kind of protest won't gain any support from society. To make a great change in the world, you need people to help and support you. Support is an essential source of opinion and petition. With more support, you can make your opinion heard, and it will raise the possibility of succeeding to make the change. To gain support from society, you must persuade and motivate them to join you. In addition, you have to remember that not everyone will support your opinion.

However, DxE's aggressive protesting tactic won't gain any support from society. When I searched the lots of articles and videos of their movement, the reaction from the society was largely negative. Especially, DxE Seoul Branch's Youtube video gained more 'hate' than 'favorite'.

As you can see in the article above, the man directly showed the strong disagreement about their movement. Of course, violence is not the right answer, but I understand his rage. DxE's protest managed to ruin everyone's time and mood in the restaurant, and the man is obviously not happy that DxE is trying to force their opinion to him. In addition, lots of customers and employees can get deeply traumatized, or possibly, terrified. This kind of protest won't do any good since the public will not support the opinion.

Even some Vegans expressed their disagreement about DxE.

In 'disagreement 2', the author of the blog, Carol Adams, vegetarian-feminist, and author of The Sexual Politics of Meat announced she will boycott any events that host DxE speakers, stating that "DxE is both a counterproductive organization [for activism] as well as cult."

I can tell this: the whole animal rights movement is in serious trouble. DxE doesn't have any intentions to change their protest tactics, and this will make more innocent people angry and terrified. DxE's protest tactic won't motivate people to join the movement, instead, it will push them away.

As a person who supports animal rights, I demand DxE following:

2. I demand an official public apology by posting a blog post or SNS post or Youtube Video that admits that the protest tactic was wrong and admit that protest tactic ended up offending lots of people in public.

3. If DxE can't do 2 things above, then DxE must disband.

Imagine yourself, enjoying a meal in the restaurant or shopping in the store, and then protesters storm the area and start shouting their opinion and belief to you. How would you feel?

Please sign now and demand DxE to change their protest tactic. The future of the animal rights movement is in grave danger.