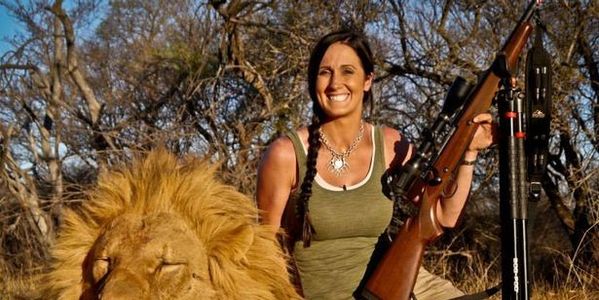 Melissa Bachman posted a picture on Facebook of her posing next to the animal, saying she had an "incredible" day hunting. The TV wildlife presenter is facing a barrage of criticism after posing with a lion she claimed to have shot during a hunt in South Africa.

Bachman - who presents American hunting show Winchester Deadly Passion - posted a picture on her Facebook account which showed her holding a gun and smiling next to the apparently dead male lion.

The image was posted along with the message: "An incredible day hunting in South Africa! Stalked inside 60-yards on this beautiful male lion... What a hunt!"

But the photograph led to a storm of criticism online, with the presenter branded "heartless" and "shameful". Even comedian Ricky Gervais expressed his disgust at the image.

Bachman's own Twitter account had been temporarily closed down. It is now back up but she is yet to make a statement about all the controversy.

In South Africa, the picture has also prompted an online petition which calls on authorities to stop her going back into the country. It has already gathered more than 487,000 signatures, and says: "[Bachman] is an absolute contradiction to the culture of conservation this country prides itself on. Her latest Facebook post features her with a lion she has just executed and murdered in our country."

"As tax payers we demand she no longer be granted access to this country and its natural resources."