Success! Kylo the Hero Dog Gets to Come Home 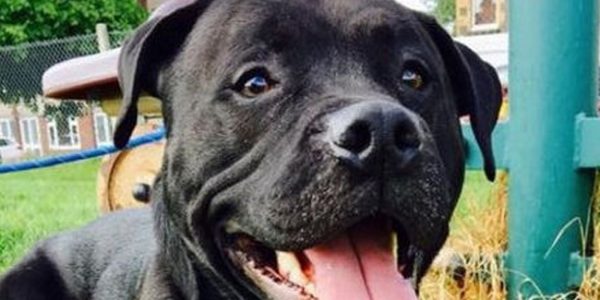 Last summer, a mob of 20 angry men showed up at the residence of a young couple in Bristol, U.K. The men believed that this was the home of a registered sex offender, and they refused to leave even when the couple explained that the person they were seeking no longer lived there.

The group didn’t believe the young couple and began attacking them. That’s when their five-year-old dog Kylo, a Staffy Cross Labrador, jumped into action and ran off 15 of the men.

But the remaining five men beat up the 25-year-old male resident, leaving him with severe bruising, a broken nose, two black eyes and a fractured rib. They also kicked and spat at the 24-year-old woman.

This attack was the worst incident in a series of assaults the couple had endured, from people banging on their door and running off to people throwing things at their windows.

Kylo saved the lives of his owners, but when the police arrived, the dog was so perturbed and riled up by all the confusion that he chased and bit two of the police officers in the continuing attempt to protect his owners.

As a result, despite the horrible ordeal the couple had just endured, the police seized Kylo, who had been with the couple for 5 years, and threatened to euthanize him.

The Care2 team was outraged when they heard about this incident, so they decided to create a petition demanding that Kylo’s life be spared and that he be returned to his human family:

Kylo was clearly doing what a good dog is supposed to do, protect his human family from danger. There was no way for him to know that the police were there to help.

Kylo’s story caught the attention of animal rights’ advocates around the world, and the petition garnered over 525,000 signatures. Amazing!

It took some time, and Kylo’s owner had to go to court to demand the return of her dog, but she was finally successful — Kylo has now been returned to his family.

Congratulations to Kylo’s owner, to all the Care2 members who signed this petition and to all the other activists who worked to bring Kylo home.

Sadly, such cases are not uncommon in the U.K.

A little over two years ago, I wrote about the case of Coco the puppy, who was taken from his family in Merseyside because the police thought the dog had characteristics of a pit bull. Coco was eventually able to come home.

Breed-specific legislation, or BSL, regulates certain types of dog breeds in the U.K. The Dangerous Dogs Act lists four breeds, Pit Bull Terriers, Japanese Tosas, Dogo Argentinos and Fila Brasileiros, that are now illegal in the U.K. But it also states that any crossbreeds that look like pit bulls may also be targets for euthanasia.

In Coco’s case, police decided she had some traits of a pit bull and therefore must be dangerous.

And in hero Kylo’s case, a simple bite on the thigh was enough to convince police officers that the Staffy Cross Labrador needed to be put down.

In both these situations, a Care2 petition made all the difference.

If you’re impressed by these successes and the huge number of signatures on the petition to save Kylo, why not start your own petition about an issue that’s important to you? Check out these guidelines to get started and soon you’ll find the vibrant Care2 community signing up to support you.