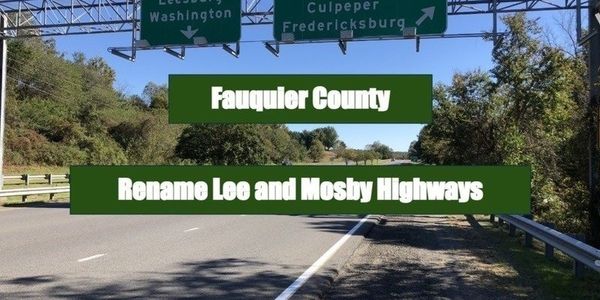 The Lost Cause was a view of the civil war that attempted to protect the honor of the southern states by making the Confederacy seem better than it truly was. The image of Robert E. Lee was at the forefront of this movement, rewriting his legacy as a good and honorable general, monuments were erected in his honor, and many pieces of important infrastructure were named after him, including our roads, Lee and Mosby highways.
This brings me to my first point, that we have now realized that honoring the generals of the Confederacy is not the right thing to do. Statues depicting brave Confederate soldiers in Richmond have since been defaced, destroyed, and finally removed by authorities. Arlington County has already taken action and changed the names of their roads honoring racist oppressors, and we can too.
Furthermore, Robert E. Lee and John Mosby were Confederate Army generals, meaning they fought and killed for slavery, which they believed to be a righteous cause. As you already know, most of America’s founding fathers were slave owners. However, the thing that separates Lee and Mosby from, say, George Washington is that while George Washington owned slaves, he did not fight to keep a system that people were beginning to realize was unjust, he opposed it.
Undoubtedly, Fauquier County is choosing the wrong figures to memorialize. Times are changing, and people will no longer be complacent about honoring and supporting the legacy of the Confederacy.
I hope that this petition can at least start a ripple of positive change, but as David Schwartz said, "Hope is a start, but hope needs actions to win victories." So please, sign this petition, it'll at most take you a minute.
Petition unterzeichnen
TEILENMit meinen Facebook Freunden teilenTWEETE-MAILEINBETTEN
Petition unterzeichnen
Mehr Petitionen sehen:
Sie haben JavaScript deaktiviert. Es kann sein, dass Ihre Website ohne JavaScript nicht richtig funktioniert.