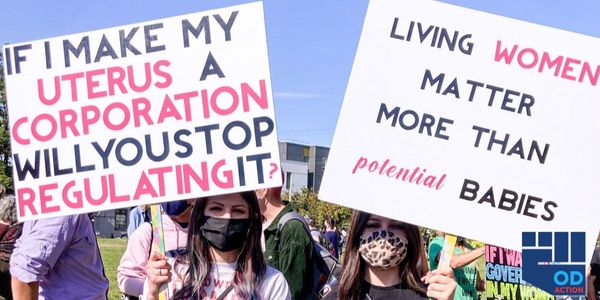 Stop imprisoning women who have miscarriages!

In over half the country, it's actually legal for prosecutors to charge women who miscarry with manslaughter in certain conditions. In late 2021, Brittney Poolaw, a 21-year-old member of the Comanche Nation in Oklahoma, was charged and convicted after miscarrying her four-month-old pregnancy. Poolaw admitted to using drugs when she sought treatment at a local hospital for her miscarriage and was later sentenced to four years in a state prison. National Advocates of Pregnant Women (NAPW) recorded at least 1,200 cases like Poolaw's that have occurred in the last 15 years, including women who simply fell down or opted for a home birth that then resulted in miscarriage. Drug use was cited in the majority of cases, and women of color were disproportionately targeted.

Yvette Cabrera at the Center for Public Inequality asserts that prosecutions stemming from increased investigation into loss of pregnancy "overwhelmingly targeted pregnant people who are poor, young, have substance abuse issues, or live in areas with limited health services." If Roe v. Wade is successfully overturned, the illegitimate assault on women's reproductive rights will only worsen and criminal charges for miscarriages will ensnare even more at-risk women throughout the country.

Attorney Farah Diaz-Tello of the national legal, advocacy, and policy reproductive health organization If/When/How described this injustice as "a vicious cycle where lack of access" and "increased scrutiny and stigma around abortion, as it becomes further restricted or criminalized, leads to more criminalization." Even in cases of substance abuse, often times addicts lack the adequate community resources to stop using. Pregnancy during addiction should not result in a prison sentence, especially when adequate harm reduction efforts are practically nonexistent.

We should be investing resources in marginalized communities instead of finding new ways to needlessly criminalize them.

Sign your name to stop women from being imprisoned for miscarriages!