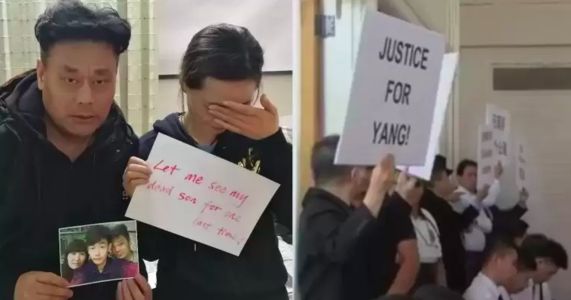 Like many hopeful pilots, 21-year-old Yang Yan came to the U.S. Aviation Academy in Denton, Texas to get his wings. But instead of finding a path to a career, friends and colleagues say he encountered racism and harassment at the hands of the school's staff.

His treatment was so bad that classmates said it drove him to take his own life.

Yan's lifeless body was found in the school's dormitory in April and since his death, several colleagues have come forward to tell of, what they feel, is the unfair and racist treatment of Chinese students by the school's staff. According to students, the school implemented travel restrictions and a strict "no Chinese" language policy that, if broken, would earn the offender harsh and humiliating punishments. For example, the school had a wall on which they would post photos of students holding up embarrassing signs like " I don't speak English like I am supposed to."

Instead of apologizing and taking stock of the treatment of Yan and the other Chinese students, the school has dug in, releasing a letter that blamed Yan's death on his lack of potential to ever become a good pilot.

In a letter, the school points the blame squarely at Yan:

"We all know that not every student/cadet that comes to USAG or any other training facility will be successful. Such is the case with the student that has chosen to take his life. The fact is that the student was identified very early in his pilot training as someone who consistently underperformed and failed to demonstrate the minimum standard on a consistent basis. USAG did our due diligence and documented this information and provided it for review to his airlines as early as October 2018."

The academy's response is disgusting and unacceptable. While no one can be blamed for Yan's death, the multiple stories of harassment of other Chinese students and the surreal, tone-deaf response from the school clearly shows that they do not respect the very students that help them stay afloat. It also says that something needs to change.

It is time for the school to reflect on how it interacts with its students. U.S. Aviation Academy's anti-Chinese policy and their purposefully malicious punishments are an abuse of their position and should be ceased at once. Please sign the petition and tell CEO J. Micheal Sykes to end the racist and discriminatory policies and treatment at U.S. Aviation Academy.
Petition unterzeichnen
TEILENMit meinen Facebook Freunden teilenTWEETE-MAILEINBETTEN
Petition unterzeichnen
Mehr Petitionen sehen:
Sie haben JavaScript deaktiviert. Es kann sein, dass Ihre Website ohne JavaScript nicht richtig funktioniert.