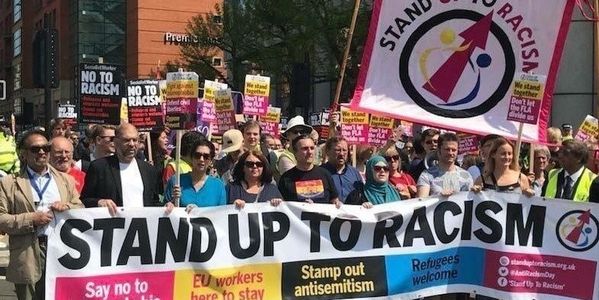 Unite to halt the rise of the far-right

The 15,000 strong violent far-right protest to 'free Tommy Robinson' on Saturday 9 June 2018 has raised major questions for all those who value our diversity.

The racist right—from hardcore Nazis, through the FLA/DFLA to 'For Britain' and UKIP—are using Robinson to re-organise. Nazi salutes and Islamophobia were at the centre of the mobilisation.

This is the first serious attempt since the collapse of the English Defence League (EDL) to develop a racist street movement and give it a political form. It is supported internationally by notorious figures including Geert Wilders from the Dutch Islamophobic right and Steve Bannon, former adviser to Donald Trump.

It is absolutely vital that all who oppose this come together in a united mass movement powerful enough to drive these new developments on the far-right back.

Donald Trump has played a major role in galvanising the racist right. We will take to the streets for the Together Against Trump demonstration coinciding with his visit on 13 July. And when Robinson's supporters take to the streets again on 14 July, we will protest against them too.

Wherever the far right's support grows so does racism and violence. Let's come together to defend our multicultural society from those who spread hatred and division.

Launch letter in the Guardian: We must come together to fight the resurgent racist right

13 July: Join the Together Against Trump National Demonstration when Trump Visits Britain

Care2
Unite to halt the rise of the far-right
TEILENTWEET