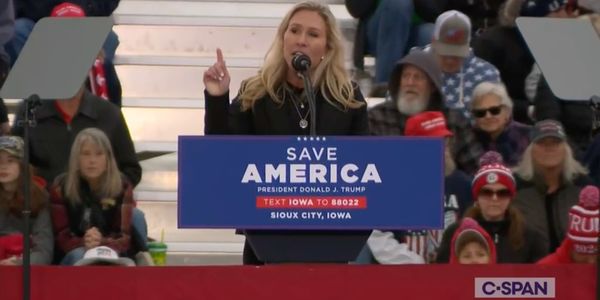 In less than a week, over 22 million people applied for Biden's student loan debt relief program, and that number is expected to continue to climb in the coming months. But Republicans are trying to get courts to block the wildly popular student loan relief in court. This is ironic considering many Republicans have had personal, student, and business loans forgiven by the same government they claim to hate. We cannot let this party continue to act against the best interest of Americans and punish people who pursued an education!

In just 20 years, in-state tuition and fees at public universities in the United States have risen by a whopping 175%. Meanwhile, wages have stayed devastatingly stagnant - in fact, the federal minimum wage has been $7.25/hour since 2009. How are everyday Americans supposed to afford a college degree, something that is increasingly necessary to enter the workforce, when it costs so much? According to Republicans, and especially Marjorie Taylor Greene, we should all just pull ourselves up by our bootstraps. But not all of us get to have our bootstraps paid for by the Paycheck Protection Program, which forgave Ms. Greene's $180,000 worth of loans.

The student debt relief plan would eliminate $10,000 of student debt for Americans making less than $150,000 as an individual. On top of that, students who received Pell Grants – a type of financial assistance to lower-income Americans who apply for college – are eligible to have an additional $10,000 forgiven. For tens of millions of Americans, this relief will wipe out all of their federal loan debt.

We cannot let the Republican party destroy one of the most popular and important federal initiatives of the Biden administration. Tell the Republican Party: we support Biden's federal student loan debt forgiveness! Cease your court efforts to block it immediately!

If you have not applied for student loan forgiveness yet, you can do so here.