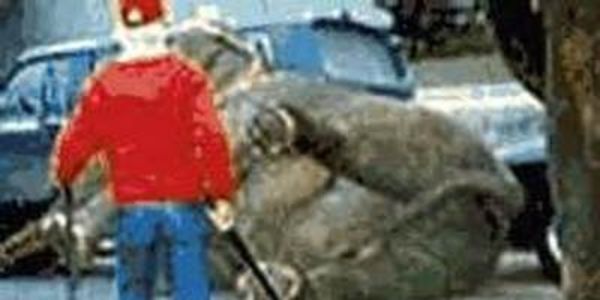 Carson & Barnes Family Circus and other circuses around the world, animals experience suffering in the hands of their trainers, (this includes those beautiful elephants, miniature horses and ponies, bears, big cats, camels, and others). To learn the tricks they perform for us, they have to endure years of being yelled at. being hit by bullhooks, electric prods, whips, or the angry and frustrated hands of their trainers, (like painful lip twists given to the horses).Please Help Suffering Of Animals At Carson & Barnes Circus

Carson & Barnes Circus forces various wild animals to perform unnatural tricks, including elephants, who in the wild walk tens of miles a day and live in large, tight-knit family groups in which female offspring remain with their mothers for life. In contrast, circuses cruelly separate calves from their mothers at less than two years of age and train them through pain, prolonged confinement and physical punishment.

The Circus is notorious for its appearance on an undercover video in which elephant trainer Tim Frisco instructs employees on how to train elephants. In it, he states: “Don’t touch ‘em. Hurt ‘em! Make ’em scream. When you hear that screaming, then you know you got their attention. If you’re scared to hit ‘em, don’t come into the barn. You can’t do it on the road. I’m not gonna touch her in front of a thousand people.”

Like all circuses, Carson & Barnes dominates elephants through dominance and physical punishment meted out with the bullhook, steel-tipped device similar to a fireplace poker used to prod, hook, stab, strike and threaten elephants into obedience. These abuses typically occur out of public view.

Barbara Miller Byrd and Geary Byrd own and manage Carson & Barnes Circus on a day to day basis. Their daughters, Kristin Byrd Parra and her husband, Gustavo; Traci Byrd Cavallini and her husband Julio, also fill various managerial functions as the family’s continuing legacy of ownership

Undercover video footage shows Carson & Barnes animal care director Tim Frisco viciously attacking terrified elephants with bullhooks--instruments with sharp metal hooks and tips that resemble a fireplace poker--and electric prods. Frisco instructs other trainers to hurt the elephants until they scream and to sink a bullhook into their flesh and twist it. Frisco also cautions that the beatings must be concealed from the public. A U.S. District Court judge described this video as "troubling" and noted that it depicts conduct that violates the federal Animal Welfare Act.

The use of bullhooks results in pain, suffering, and trauma, often including lacerations, puncture wounds, and abscesses. Although elephants' skin appears tough, it is so sensitive that elephants can feel the pain of an insect bite. Trainers embed the hooks into the elephants' skin and soft tissue areas. Bullhook abuse is routine at circuses, but penalties are rare. Elephants will not be afforded more humane care until communities prohibit these cruel devices.

An elephant's ability to feel pain--as well as sorrow, joy, and happiness--rivals our own. In circuses, every instinct is subject to discipline and animals live a sad life of punishment and confinement. Elephants who reach for a blade of grass suffer a painful blow from a bullhook. A fumbled trick during the show often results in a beating.
We hope you agree that the abuse of animals in circuses is unacceptable. We the undersigned Ask you to make sure this is  the last time that elephants will have to endure the bite of a bullhook in Baytown.

Thank you for your consideration of this matter.