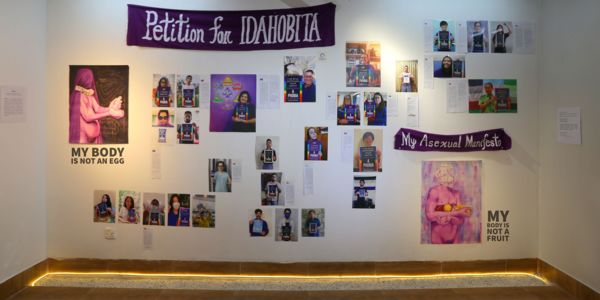 Asking for the name change- IDAHOBIT to IDAHOBITA

We have petitioned for IDAHOBITA. The purpose of which is to bring forward the fact that high-profile movements against LGBTQ+ phobias, like IDAHOBIT, have rarely or never addressed asexuality or ace phobia. Often the efforts made by asexual people to be accepted are considered less legit since people believe that there are no discriminatory laws in the world for asexual people.
The A-Phobia Campaign, we believe, is the largest photo campaign by asexual people to focus solely on their experiences of violence, discrimination, harassment, and anti-asexual hate crime. We have followers from many other countries including our 13 member countries in Asia.
Behaviors and attitudes that are considered discriminatory include the idea that asexuality is a mental illness, that asexuality is a phase or a choice, the idea that asexual people cannot feel love, and those that make asexual people feel dehumanized. Adding knowledge to eliminate future A-phobia and improve data collection beyond the Asian underprivileged communities that I am currently calling for on the global petition.
There are many people in the world who are not interested in having sex. But the people around them don't understand it. There are many married women who suffer from spousal rape because they do not feel comfortable in the sexual relationship. There are also many men who are asexual. These men are also considered impotent by the society. But they are not infected with any sexually transmitted diseases. They are healthy-normal and that is their orientation.
We gathered a lot of qualitative data about South Asian women and men facing forced marriages, pressure to get marriages, and even no safe homes after running away from home to escape marital violence. The experience of Muslim women in South Asia not being granted the right to divorce due to marital rape under Sharia law, while on the other hand asexual men claiming impotence and demanding large sums of compulsion during divorce is particularly notable.
But one drawback of our research - it was mainly English-language and online-based, and many areas of Asia did not have internet access. As a result, we are undoubtedly forced to limit it to an almost privileged and educated people. I am afraid to assume that the underprivileged people, how much are they living in brutality, which is not brought up in our campaign.
Last , but not least, asexuality is a part of sexual diversity, and aromanticism is a valid romantic orientation. Therefore they belong within the LGBT+ community. We need asexual friendly queer community. In health care settings, providers are responsible for understanding these nuances and working with each patient individually to meet their needs. And law firms should help us every step of the way in seeking justice for unlawful asexual discrimination in the family & workplace. We need awareness to avoid hostility and protect human rights violations.