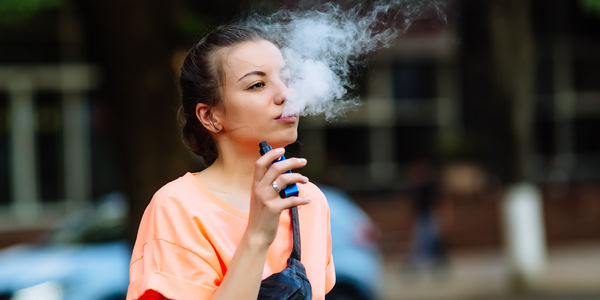 E-Cig Companies Are Using This Trick to Hook Young Smokers

Last year, Jon-Patrick Allem, an assistant professor at the University of Southern California, and his colleagues published a troubling study that e-cigarette companies were using cartoons in their marketing campaigns.

The news raised eyebrows because, cartoons, like flavored vaping oil and bright colored, fashionably designed vaping pens, seemed to be focused on attracting a younger, non-smoking age, clientele. E-cigarette companies had already come under scrutiny for their use of social media that seemed to target young smokers. Now, with the use of cartoons, it was clear that their ultimate goal is to hook young Americans on smoking to build lifetime customers.

Yet, until now, there was no proof that the cartoon ads used by e-cigarette companies were actually working. Recently, however, Allen along with his colleagues published a study in Drug and Alcohol Dependence that analyzed young adults' likelihood to start using e-cigarettes having been exposed to cartoon marketing. The results were troubling. The researchers found young adults who recognized at least one cartoon image from e-cig ads were four times more likely to be susceptible to using e-cigs in the future when compared to those that didn't.

That means that cartoon e-cig marketing has the effect of drastically increasing vaping among young adults. And while e-cigs may possibly be less dangerous to our health than traditional cigarettes, they are still a health hazard. E-cigs still contain nicotine, which is addictive and can "curb adolescent brain development."

Using cartoons to market cigarettes and other tobacco products has been restricted for nearly 20 years. But there are no similar restrictions barring e-cig companies using cartoons as well.

That needs to change. The loophole that allows e-cig companies to use marketing images designed to attract kids and young adults (and thus line their pockets with the allowance money of young users) needs to be closed.

It's time government regulators crack down on e-cig companies' sneaky tactics to try to create future lifetime smokers. Sign the petition and ask the federal government to ban cartoon marketing by e-cig companies.
Sign Petition
SHAREShare this petition with friends!TWEETEMAILEMBED
Sign Petition
See more petitions:
You have JavaScript disabled. Without it, our site might not function properly.