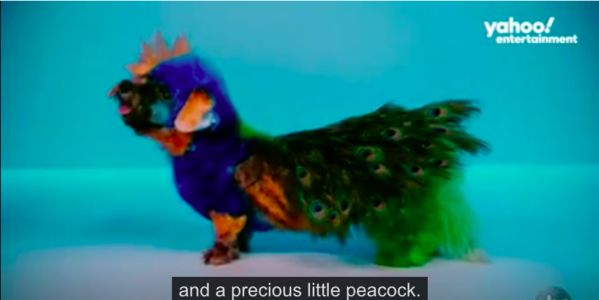 Actress Rebel Wilson stars in a new ABC series called Pooch Perfect, all about dog grooming. Unfortunately, it's less about dog grooming and more about exploiting dogs using questionable methods like dying the animals' skin and coat and gluing things into their bodies as well. The problem, of course, is that many people at home will see the show and try to do something similar to their own animals and may really hurt them!

Sign the petition if you want to see this show stop using these more abusive practices and just stick with normal grooming and creative clothes!

We all love to see a dog dressed up in clothes and, as long as the animal appears relaxed and comfortable wearing clothes, there is nothing wrong with dressing them up. Additionally, many dogs require a coat to stay warm in the winter and booties to protect their paws from salt in colder climates. This TV show would be just as interesting if they were simply designing unique clothes for dogs and doing normal grooming things.

The fact that they had to step it up and dye many of the animals a bizarre color is just not OK. We have seen dozens of cases over the years of people dying their animals a certain color at home and harming or even killing their animal because the dye was toxic for it. Not to mention, if an animal has a dark coat, they will have to bleach that coat in order for it to hold other colors. If you've never had your hair bleached, it can be pretty painful! Why would we do that to an animal that's confused about what's happening, and can't communicate whether they want it or not?

Aside from the dye, people on the show also appear to glue weird things into the animals' coats and sometimes onto their skin. One image shows peacock feathers integrated into a pup so seamlessly that they must be glued or fastened down somehow. Some of the animals also seem to have paint on them. We really hope the producers focused on getting non-toxic materials, but we know most people are fine with putting animals in harm's way for their own gain, so who knows.

The whole show is borderline abusive to the animals involved and it's going to normalize trying weird things on your pets that could cause serious injury or maiming. Sign now to demand the show models appropriate dog care by stopping the more aggressive body modifications they are doing to dogs!