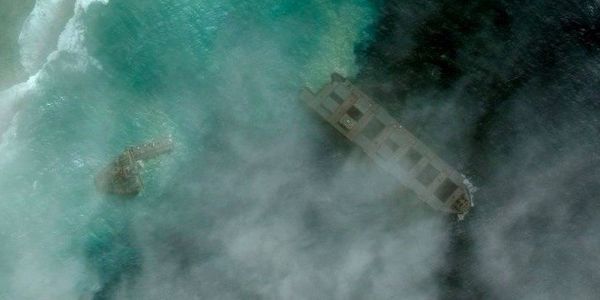 Our world's filthy reliance on fossil fuels to power our days has done it again. It's caused another giant oil spill, this time in a beautifully biodiverse area of the Indian Ocean, off the coast of the African island nation of Mauritius.

In late July, a Japanese-owned ship carrying approximately 4,000 tons of various types of fuel was cruising through these uniquely bio-rich waters when suddenly it started veering off course. Crew members were having a party on board, and apparently no one noticed or jumped in to fix the ship's trajectory. It struck a coral reef and ran aground — in the process, releasing 1,000 tons of fuel oil into the pristine sea, only 460 tons of which have been recovered.

The corporation behind this ship's spill, Nagashiki Shipping, must take full responsibility and clean up the entire catastrophically deadly mess, now!

In the month since that collision, the tanker's oil spill has bloomed out into the ocean, growing eight times in size. The spill's deadly blobs now cover upwards of 10 square miles, polluting and infecting all fish and wildlife it comes in contact with. And with every passing day, the ship actually continued to leak more and more tons through its damaged hull.

This on its own is already supremely shocking and horrifying. Mauritians have been outraged by the disaster, rushing to set up relief funds and to volunteer in the clean-up efforts, even though civilians should never have to fix the problems that greedy corporations created. But unfortunately, the situation still gets worse.

Several weeks after the wreck, cracks in the side of the ship began growing larger and larger — until eventually, the whole vessel split in two. At the time of its sundering, this ship was still carrying roughly 2,500 tons of fuel, and it's currently unknown how much of this additional oil and diesel flooded out into the ocean, adding on to the already horrific situation.

One would think that the corporation's and government's first obligation would be to recover all fuel from this ship and undo this situation as quickly as possible. But no. What's actually happening now is that they plan to make it worse.

The ship has since been dragged out into the middle of the ocean. And then, on August 21, both remaining parts of it were intentionally sunk to the bottom of the sea. With all of its oil-slick surfaces and toxic heavy metal construction. And it will remain there, befouling and poisoning the waters, wildlife, coral reefs, and entire ecosystem, potentially forever.

No part of this is acceptable. What started off as a devastating situation has only grown worse and worse by the day. The people of Mauritius, local wildlife and marine life, and the ocean environments deserve better!

Sign the petition to demand that the owner of this oil-spilling ship, Nagashiki Shipping, immediately pay the full costs to completely clean up this disastrous oil spill, now!
Sign Petition
SHAREShare this petition with friends!TWEETEMAILEMBED
Sign Petition
See more petitions:
You have JavaScript disabled. Without it, our site might not function properly.