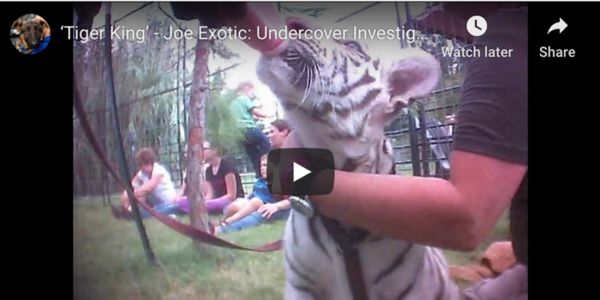 Throughout the United States, thousands of big cats are sold, traded, and kept in cramped, barren cages as pets or as attractions in roadside zoos that sell interactive experiences to the public. When kept in captivity, these large predatory animals require behavioral enrichment and special diets and veterinary care, as well as spacious natural habitat enclosures that provide them opportunities to exercise and express natural behaviors.

However, big cats kept by unqualified people and transported around the country for exhibition do not benefit from such conditions. Instead, they have been found badly neglected and living in deplorable settings, ranging from junkyards to truck stops to tattoo parlors to empty concrete pools.

Numerous exhibitors have been found to charge the public to pet, feed and take photos with tiger and lion cubs at fairs, festivals and roadside zoos. To be used for public handling, the infants are torn from their mothers shortly after birth and forced to endure rough and excessive public handling. The cubs are deprived of sleep and regular feedings and are physically abused by handlers attempting to keep them under control. After just a few months, these cats get too large for public handling and are often discarded by selling them as pets or warehousing them at roadside zoos or facilities claiming to be sanctuaries.

These situations are not just harmful to the animals and the conservation of these endangered species—they also pose public safety hazards. More than 380 dangerous incidents involving tigers, lions and other big cats have occurred since 1990. Five children and 19 adults have been killed, and hundreds of others have lost limbs or suffered other often-traumatic injuries.

In many cases, the animals were shot and killed, often by first responders who are not trained to deal with such situations. The most notable example occurred in Zanesville, Ohio, in 2011 when a private owner released his collection of exotic animals, including 38 big cats, near a populated area. Law enforcement officials risked their lives trying to contain the animals, but ultimately had no choice but to fatally shoot most of the cats for the sake of public safety.

The Big Cat Public Safety Act strengthens existing laws to prohibit interstate sale, possession, and breeding of big cats by unqualified individuals. Your voice is needed to encourage passage of this bill.

Introduced in the U.S. House by Representatives Mike Quigley and Brian Fitzpatrick and in the U.S. Senate by Senator Richard Blumenthal, this legislation would advance animal welfare and protect public safety by prohibiting interstate sale, possession, and breeding of tigers, lions, leopards and other big cat species by unqualified private individuals and facilities engaged in public contact activities. The bill provides reasonable exemptions for wildlife sanctuaries and exhibitors licensed by the U.S. Department of Agriculture that meet basic standards intended to protect the public and animals.

This is also a public safety issue. Improperly maintained captive big cats injure, or even kill, people. Law enforcement officers and other first responders are at particular risk from such animals, which is why the National Sheriffs' Association has endorsed the legislation. Emergency officials and the communities they protect should not be put in harm's way by a private owner's irresponsible decision to keep big cats.

Big cats are wild animals who suffer when kept as pets. They are often purchased as babies but quickly become powerful, unpredictable and dangerous wild animals who cannot be easily handled. As a result, these animals then frequently get left to languish in grossly substandard conditions, deprived of sufficient space and care.