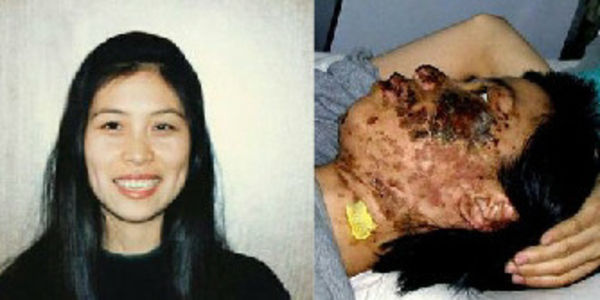 Falun Gong (Dafa) is a peaceful qigong meditation practice guided by the characteristics of the universe - Truth, Compassion and Tolerance, practised in over 100 countries. http://www.falundafa.org/eng/intro.html.

Although at first having the Chinese government's backing from 1992 when it was introduced by Master Li Hongzhi, in 1999 when it was estimated there were between 70 and 100 million adherents on China, the Chinese Communist Party, then lead by Jiang Zemin,  launched an extra-judicial campaign of persecution to "destroy Falun Gong". Using over 100 methods of torture including; shocking with high-voltage electric batons all over their bodies including genitalia, hammering bamboo nails under finger nails, burning with cigarettes, they are forced to give up their practice, (http://faluninfo.net/topic/7/). To date, according to the Minghui website (http://en.minghui.org/) 3906 Falun Gong adherents have died as a result of some form of torture, although the actual number could be 100 times this figure.

Another sinister element to the persecution is according to 'Bloody Harvest' by Matas and Kilgour, the alleged harvesting of organs from live Falun Gong adherents, whose organs are removed to order and sold for profit, the remains are incinerated.http://www.youtube.com/watch?v=bvAOOwvJMZs According to David Kilgour, two thirds of torture victims in China are Falun Gong.  http://organharvestinvestigation.net/

The Chinese Communist party have been persecuting Falun Gong for 17 years, IT MUST STOP, ENOUGH IS ENOUGH. Let us join together to stop the unnecessary deaths of the peaceful and innocent Falun Gong adherents, and send a message to the world, we wish to protect Truth, Compassion and Tolerance.

Wish to bring to your attention the most inhumane and evil persecution known to man, that is being perpetrated by the Chinese Communist Party (CCP) against the innocent and peaceful Falun Gong adherents in China.

We are sure that you have some knowledge of this horror, but feel that the time has come to raise the profile of these atrocities and implore you to make more efforts to publicly condemn the CCP for their unlawful actions and to press them to stop the persecution forthwith, to release all those held illegally and for all those responsible for human rights abuses to be brought to justice.

Let's give the Falun Gong adherents in China a future, starting now.

You are our voice, please speak.