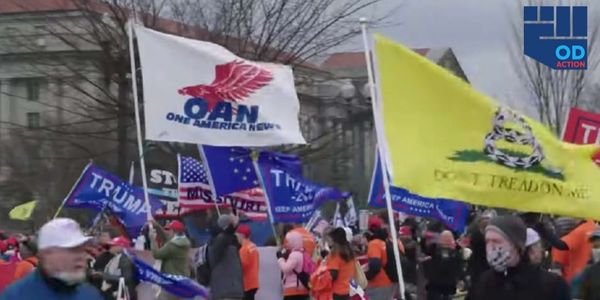 Tell the other cable providers to drop OAN and follow DirecTV’s lead!

Far-right wing propaganda networks are a clear and present danger not just to our democracy but to public health as well, filling the minds of their viewers with white supremacist conspiracy theories and delusional anti-vaxx hysteria.

When it comes to promoting MAGA brain rot, One America News Network (OAN) is the worst of the worst — yes, even worse than FOX News. Slavishly devoted to Trump, the network has spent the past year breathlessly telling its viewers that the 2020 election was stolen, even getting sued by Dominion Voting Systems after an anchor publicly accused the company of having secret ties to Venezuela and using "vote flipping" technology to steal votes.

After a tremendous public outcry, DirecTV has finally decided to drop OAN from their cable service.

Add your name to tell the other cable providers to drop OAN and put a stop to the flood of dangerous misinformation, anti-science conspiracy theories and pro-Trump bootlicking!

The threat that OAN poses to our democracy was made clear on January 6th, where an OAN flag flew outside the Capitol as a rabid mob of its viewers forced their way into the halls of Congress. In the year that would follow, OAN pushed false-flag conspiracies about Jan 6th and even more absurd denials.

"There was no insurrection. Democrats weaponized the events of January 6 to wield against the American people," declared OAN "reporter" Pearson Sharp.

There is no reason that racist conspiracies, election lies and COVID-19 misinformation should be available in your cable package, let alone spread by a channel pretending to be an objective news source.

Sign now to keep OAN off of cable networks for good!