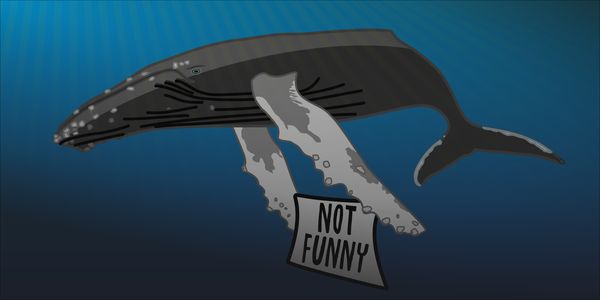 Tell Stedji not to make beer from whale testicles, whale bones or any other whale bits!

It seems that a few Icelandic citizens really do like to irritate people in other countries don't they?

2014 Hvalur Þorrabjór Steðja is one of the most contriversery beer in the world. It´s brewed with milled whale bones. This brew is specially made for the icelandic midwinter festival called "Þorri". There icelandic people celebrate the Thundergod Þór and eat food in old icelandic style, for example: rotted shark, ram´s testicals, soured whale fat etc... SOLD OUT 2016 Hvalur 2 Þorraöl Steðja is even more contriversary, it´s an ale we brew for the season of Þorri. What makes this beer special is that, it´s ingredients, Pure icelandic water, malted barley, hops and sheep shit(dung)-smoked whale balls. Icelanders have used this method of smoking for centuries, so we choosed to handle the whale balls the same way, before we use it in the brew. Because a lack of trees in Iceland, we use dry sheep shit(dung) to smoke. This gives the beer an excellent smoke tast, a smoke tast you havn´t tryed out before... The balls also gives its flavour to the beer...... This is one of a kind...

Yes. It's one-of-a-kind bullshit is what it is. It's a pity because I really like the cartoon illustration of the label. It just goes to show that design can be used to convince people to buy anything.

According to Fréttablaðið, the Icelandic micro-brewery Steðji has begun to produce the beer Hvalur 2, which contains smoked whale testicles. The beer is produced for the Icelandic mid-winter festival Þorrablót, and is not being made for export.

This is the second consecutive year Steðji creates a beer from whale products. Last year the brewery launched Hvalur, a beer containing whale meal. However, the Ministry of Industries and Innovation banned the sales of the beer as whale hunting company Hvalur hf. did not have authority to sell whale meal to Steðji. Many environmental groups, local and international, also criticised the brewery’s use of whale meal in its products.

Dagbjartur Arilíusson, Steðji’s owner, says the brewery’s aim was to create a “traditionally Icelandic beer” for the mid-winter festival, which begins on 23 January.

Brewery Steðji will introduce a Thorri beer, Hvalur 2, later this month following the success of Hvalur Thorri which the company brewed and introduced last year. A lot of preparation went into Hvalur 2, according to the owner of the brewery.

"We want to create a true Thorri atmosphere and therefore we decided to put smoked testicles from fin whales into the beer for flavoring" says Dagbjartur Arilíusson, one of the owners of brewery in Borgarfjörður.

"The testicles are cured according to an old, Icelandic tradition, lightly salted and then smoked. We put a lot of effort into this and it's a long process," Dagbjartur says, adding that each brew had contained one testicle.

Popular predecessor
According to Dagbjartur, the beer will follow the Thorri beer that Steðji sold in January last year, which contained whale meal.

Vesturland Public Health Safety prohibited the sale of the beer, but the meal contained among other things the viscera and intestines of whales.

A few days later, Sigurður Ingi Jóhannsson, the minister of Fisheries and Agriculture, decided to allow the sale of the product. A week later, it was sold out when five thousand liters had gone through the liquor stores of the State Alcohol and Tobacco Company of Iceland.

"The beer was sold out almost immediately and therefore we decided to produce a similar product for Thorri," Dagbjartur says.

A great number of challenges, asking for whale beer
The decision of Vesturland Public Health Safety was confirmed last October by the Ministry of Industries and Innovation. Therefore, the sale of beer from whale meal is not authorised.

"However, we had a great number of challenges where we were asked to have the whale beer available again. This was decided, but we have got all necessary licenses for manufacturing and selling of the beer," Dagbjartur says.

"Whale testicles and blubber are removed by the relevant control authority on behalf of the Icelandic Food and Veterinary Authority. However, the content intended for whale flour is a by-product not meant for human nutrition and has not been certified as such."

The sales start January 23rd
The beer is 5.1% in alc. A whole testicle is used in every brewing and then the beer is filtered and pasteurized.

"Everyone will be happy with the quality and the pertaining Þorri atmosphere."

Care2
Tell Stedji not to make beer from whale testicles, whale bones or any other whale bits!
SHARETWEET