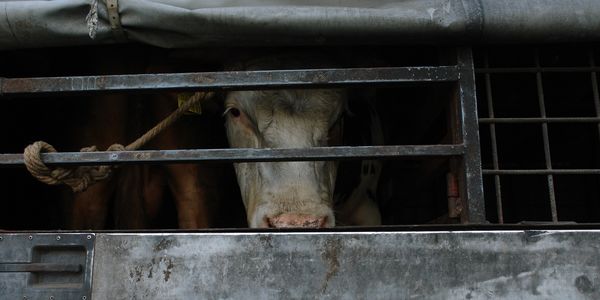 Nearly 2,500 cows are sick and dying after having been stranded at sea for 2 months and counting, demand help!

Being stranded at sea is something straight out of a nightmare or a horror film.

But for thousands of helpless, terrified Spanish cattle, that nightmare has been their reality for over two months -- with no end in sight.

Sign the petition imploring Italy and Cyprus -- the nations closest to their location -- to send in vets to immediately attend to these sick, scared, stranded animals!

These cows were part of a live animal export out of Spain consisting of two ships, which left the country on December 18, 2020 bound for Libya. But then, unexpectedly, both ships had an outbreak of bluetongue disease -- a viral infection that is spread between livestock by insects. Because of the outbreaks, multiple ports have turned the ships away. The vessels, one with around 1,700 cows and the other with 900 aboard, have each had to anchor themselves off the coasts of Sardinia and Cyprus.

It is understandable that the powers that be would want to quarantine these sick cows. That is the main way this disease is combated. But, as the chair of the European parliament's animal transport inquiry committee put it, "a ship is not a floating stable. It is an unnatural, often stressful, overloaded and understaffed environment…" And if quarantining these poor animals out to sea wasn't cruel enough, doing it without veterinary care is basically dooming them all to painful, miserable bouts of sickness and slow, agonizing death.

Bluetongue disease causes cows to develop a fever, creates immense swelling throughout their bodies which make any type of movement extremely uncomfortable, causes difficulty swallowing or breathing, and sometimes even results in death. These cows need medical help, but instead they have become stateless in their sickness. Many are probably too sick to recover, but instead of being humanely euthanized, they will slowly die, crammed together in tight, dirty quarters.

Spain has said they will accept the cows back into the country, but there is no time to lose and these animals are far too sick to be transported again. Live exports are traumatizing, horrible experiences for even a healthy animal, and many animal welfare organizations are calling for the practice to be banned in the EU altogether.

Tell the governments of Italy and Cyprus to send in veterinarians to help these poor, sick cows who have been stranded at sea for over two months!

Care2
Nearly 2,500 cows are sick and dying after having been stranded at sea for 2 months and counting, demand help!
SHARETWEET