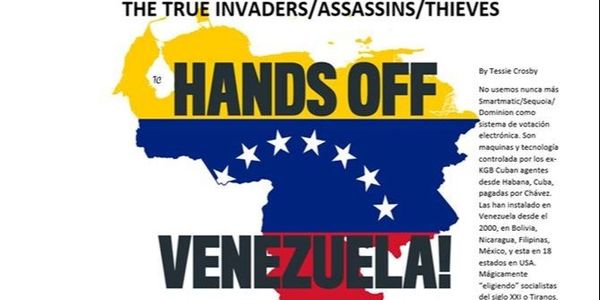 It is a story of life or death, one that people who do not speak Spanish would not hear on the English news but that is and will be affecting the USA, Venezuelans, and many other countries in the world if action is not taken today. It reads like a spy novel, but it is actually the most dangerous Trojan Horse in the history of the world. https://www.linkedin.com/pulse/facebook-supports-communism-voting-fraud-usa-mrs-t-c-/


It started with Cuba invading Venezuela little by little, ideologically, and then eventually with paramilitary groups since 1978 - 2019. After the cold war, Cuba found itself without the monetary support of the USSR, so they put together a plan to invade RICH OIL Venezuela. They found a subject with the charism to lie to the population while smiling and made him a hero. A Cuban trained man that was starving for power and self-adulation on the body of Hugo Chavez.


Under the direction of Fidel Castro and Raul Castro, whose permanent envy and desire for revenge toward the USA had been futile since the Cuban Missile Crisis, Hugo Chavez started eliminating, and misappropriating any private industry from little to big, from houses to farms just because Hugo Chavez will point at them with his index finger.


The Castro brothers, Hugo Chavez, and the Venezuelan Software engineers Mujica Brothers then created using multibillion Venezuelan Government funds an electronic voting system called SMARTMATIC/SEQUOIA/DOMINION which they can electronically and fraudulently manipulate the votes on any elections, on any country where the Smartmatic voting systems has been installed.


The Castro Brothers Fidel and Raul, using Chávez created a decade massive "public relations" campaign against the United States. Accusing the United States, its people, and Government of countless crimes in Venezuela, from espionage to murdering capitalism, to CIA/FBI manipulation of the government in Venezuela. No of it true, that "brainwashing" campaign was created to rally the Venezuelan people (poor uneducated people) to support the Castro Cuban Hugo Chavez “socialism of the 21st century” aka communism.


Castro/Chavez invested all Venezuela patrimony in buying the people to support them in their expansion of Cuban communist ideology in Venezuela, in poor people programs that lasted as long as there were private companies that they could take their money and lifelong savings under the “government” hands.


Castro/Chavez also invested billions and billions in acquiring weapons of mass destruction, and in expanding SMARTMATIC electronic voting system all over the world under the fake presentation that it is an Electronic Voting system from England.


Cuba/Venezuelan owned Smartmatic has been successful in installing SMARTMATIC in many unsuspecting COUNTIES and countries around the world.

HERE IS THE TROJAN HORSE: Smartmatic or a division of it has been installed throughout many counties in as many as 18 states in the USA; magically “electing” candidates that have socialistic, communistic, or left tendency ideologies. That expansion of Smartmatic is a calculating invasion of the Castro Communism all over the world. Smartmatic, Citgo, and El Cartel de Los Soles have provided financial "contributions" to Joe Kennedy for oil, Bernard Sanders, Danny Glovers and his money laundering organization called Trans Africa, Carter, and Clinton Foundations and many others.

The latest country casualty is MEXICO where Castro Venezuela Communist government finished installing SMARTMATIC on June 6, 2018, throughout all Mexican territory and on July 1st election, an exact copy of Hugo Chavez "won" in Mexico. Lopez Obrador is currently implementing, talking, and observing the same Castro communism obedience Hugo Chavez had towards Cuba. It is almost as if a speech manual has been created by the Castros.


We the people of Venezuela realized our mistake and we have been fighting for our freedom for about 5 years now. On April 2018 we voted OUT the “successor” of Hugo Chavez, Nicolas Maduro, a tyrant, assassin, who has never been elected to be the president of Venezuela. 95% of Venezuelans voted Maduro OUT, and somehow he "won" on a landslide? https://law.stanford.edu/2019/02/01/guaido-not-maduro-is-the-de-jure-president-of-venezuela/?


Again, the Venezuelan people voted Nicolas Maduro out and the Castro Cuban military does not want to leave and continue to use Venezuela as their personals cash cow to further communism all over the world. https://fsi.stanford.edu/news/crisis-venezuela-continues-three-possibilities-sight


On January 10, 2019, Nicolas Maduro supported by all communist countries in the world, self-appointed himself again President of Venezuela. This is not true. NICOLAS MADURO HAS NEVER BEEN ELECTED PRESIDENT, Maduro destroyed the legitimate assembly placed his own cronies in it, had FAKE elections where no candidates only himself was allowed to run.

Juan Guaido as the president of the National Assembly and THE LAST GOVERNMENTAL BODY EVER TRULY ELECTED BY THE PEOPLE, as indicates in Venezuelans constitution, is the current legitimate president of Venezuela. Maduro is a puppet of Castro communism.


We Venezuelans need the military support of the international community if we are ever going to get rid of the Castro communism in Venezuela, and also WARN and ASK the USA and other countries in the world to delete, eliminate, get rid off SMARTMATIC/SEQUOIA/DOMINION as your electronic voting systems which is a proven TROJAN HORSE to implant "Socialism of the 21st Century aka communism in the world. Smartmatic is communism secret weapon on top of massive brainwashing campaigns to divide humans using any ideology they see fit such as political, income, race, gender. etc. It has also been proven that Cuba/Venezuela is behind the terrorist attacks in many nations to create chaos during the time people are getting closer to find this information.


Cuba/China/Iran/Russia is killing, kidnapping Venezuelans, us, murdering us, raping us, denying humanitarian aid, destroying our country totally. 10% of the Venezuelan population has fled the country.

Everything in Venezuela looks like a Hiroshima bomb has hit, the people are dying of lack of medicines, lack of water, electricity, and we are migrating all over the world, walking for months, starving, eating food from garbage, eating the animals in the zoo, the dogs, the cats, delivering babies on the streets, babies put in cardboard boxes when they are born, or babies dying.

A coalition of Communist parties (Corbyn in England) is being financed and paid by Castro Cuban Venezuela Maduro communism to create chaos, protests, and campaigns all over the world to deviate people from the truth. Venezuelan large reserves of natural resources are paying not only for the communist invasion of many countries around the world, but it is using Smartmatic as the biggest Trojan Horse in history of the world to ensure leftist, socialist, communist governments: "win" by manipulation of votes, and establish communism in our countries.

Please feel free to investigate for yourself, Lins to this will be provided below. Please sign and share this petition!