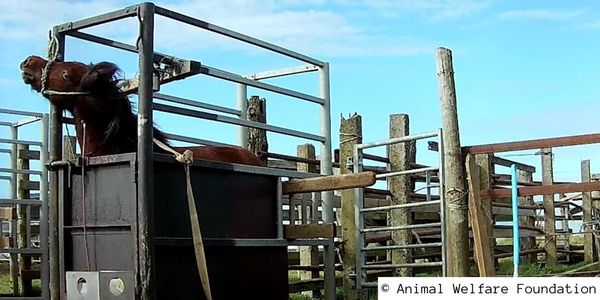 A previous version of this petition failed to give credit to German NGO Animal Welfare Foundation, which carried out the investigations of blood collection in Iceland and brought to light the cruelty of this industry. The below petition has been amended to correct this.

There are 119 farms in Iceland that aren't normal facilities. They're "blood farms," where live, semi-wild pregnant horses are held captive and mined for hormones inside their blood. More than 5,000 horses are currently exploited in these horrific conditions.

Farmers extract the mares' blood during summer months, which is turned into powder by the Icelandic pharmaceutical company Isteka. This product is then sold and shipped internationally to European pharmaceutical companies, which then create the final product: a hormone farmers use to force their livestock, including cows, pigs, and sheep, to reproduce more than they ordinarily would. It can even induce early labor, causing pregnant mamas to give birth sooner than is healthy. And this, obviously, is all because increased reproduction leads to more profits for the farmers in industrial breeding, even if it's not natural for the animals.

As one doctor and horse owner in Iceland said, after learning this horrifying news: "I would like people to know that Iceland is actually stabbing semi-wild pregnant mares, taking their blood in extreme volumes and frequency, just to ... make pigs have more pigs."

Sign the petition to demand an end to abusive "blood farms" in Iceland!

Animal Welfare Foundation, based in Germany, managed to obtain covert footage of this heart-stopping nightmare. In two such facilities, handlers were hitting the panicked horses and imprisoning them inside so-called "restraint boxes." Once locked in place, huge needles were pushed into the pregnant horses' jugular veins.

When harvesting the mares' blood, farmers aren't just taking small droplets. On the contrary, they're regularly extracting around four times the maximum amount that international standards allow. Farmers regularly withdraw 5 liters (1.3 gallons) of blood from each horse each week, for 8 weeks in a row. The stress on these mares is unimaginable; in their weakened state, they must still use energy to cover the production of milk for their newborn foals, to support growth of their unborn, and regenerate lost blood. Ingunn Reynisdóttir, an Icelandic veterinarian who specializes in working with horses, says: "It's too much [blood] and ... they are trembling and have difficulty walking."

Most Icelanders didn't even know these grotesque farms existed until now. For decades, the facilities have managed to avoid the public spotlight and operate in the shadows. But now that the situation has been revealed, Icelanders are rising up in opposition to this blood-harvesting practice. The European Union is also speaking out, calling the practice "cruel" and considering a ban on the blood-hormone imports.

Horses are living creatures and don't deserve to be exploited in this way. They are not ours to use and abuse! We must stand with these horses and elevate the voices of Icelandic animal lovers!