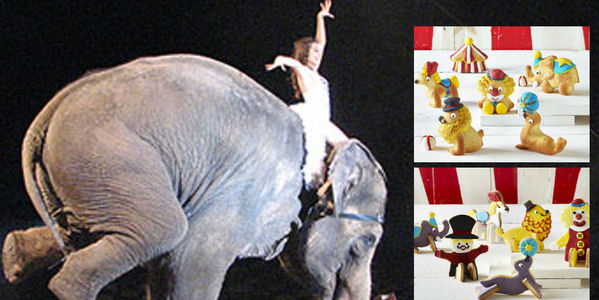 Unfortunately this range now includes a number of items that have circus animals as a part of them. Their cookie cutter and cake mould sets both contain elephants and other animals.

After writing to Lakeland's customer care department, we received a standard 'our product team will look into this' letter. There has been no further communication since.

Sign this petition if you believe that animals have no place in the circus. A life of captivity and being forced to perfom repititious and often painful acts, is not fun and is not entertaining. By selling a range of products that show circus animals, Lakeland are indirectly supporting the continuation of a business with a long and depressing history of animal abuse.

If enough people sign this petition, it will be forwarded to the customer service department of Lakeland, asking that these products are removed from sale - keep the clowns, the ringmaster, the big top etc. but not the animals. Animals have no place in the circus.

I am writing to you on behalf of over 1,500 people who have signed a petition on Care2.com, the petition was created to send a message to Lakeland requesting that you do not continue to sell circus animal themed products. You currently have four products depicting performing animals, available for purchase, namely:

On the face of it, these are harmless and amusing products depicting well-loved animals. The unfortunate side to this is that circus animals are often kept in isolation, poorly treated (and often abused for training) and forced to perform unnatural and degrading acts for the entertainment of people.

Many countries around the world have banned the use of wild animals in circuses (Austria, Cyprus, Greece, Mexico to name a few) and there have been discussions about a UK ban over the past few years – with the vast majority of the public against the use of wild animals in the circus (https://www.gov.uk/government/uploads/system/uploads/attachment_data/file/228862/8538.pdf).

The products you are selling are playing a small part in normalising the use of animals for entertainment – even though it is just a small part, it is one that can easily be stopped, simply by no longer selling these products and by making a commitment not to stock circus animal themed products in the future.

The signatures that have been collected for this petition have been received within the last 23 days and they are still coming. I am aware Christmas is approaching and expect this will be a busy time for you but, in 28 days (2 January 2016) I will be updating the petition and would like to be able to post a comment from Lakeland about the future of these (and any other circus-themed) products.

I will leave you with the words of some of those who have signed the petition (which includes a number of people who have stated they are Lakeland customers), you can see these, and other comments, on the petition at: http://www.thepetitionsite.com/en-gb/408/444/236/tell-lakeland-that-normalising-the-concept-of-captive-circus-animals-is-wrong/

Please don't encourage young minds to believe that its natural to have wild animals preforming in a Circus! It's not, it's ethically wrong! - Bernadette Harrow, United Kingdom

Please don't sell items that promote the use of animals in the circus. The life of a circus animal is anything but fun, cute or enchanting. - Cecelia Samp, Illinois USA

As a regular customer, I'm appalled that you have included items portraying cruelty to animals. You have lost my custom until these products are withdrawn. – Jenny Shaw, United Kingdom

Animal cruelty for entertainment has no place in the 21st century, and selling items that promote it is in poor taste. Please consider replacing "circus animal" themed products with "wild animal" themed products instead. You could still sell products which depict elephants or other animals, but do not depict them performing painful circus stunts and do not include them in circus themed sets. – Tara B, Michigan USA

I have been a regular customer for years, but will not shop with you again until you withdraw these items from sale. Perpetuating the idea that forcing animals to perform is acceptable is totally irresponsible and shocking. - Lesley Moghaddassi, United Kingdom

Please take the animal cookie cutters cake molds of animals off the market. These animals are notoriously abused and making more money off their suffering is wrong. - Susan Kohn, Pennsylvania USA

It is NOT normal to have performing animals! This concept must not be encouraged by Lakeland! - Joan Jordan, United Kingdom

I won't buy anything else from there until they remove them!!! - Joan Melling, United Kingdom

If everyone could see how these circus animals are treated, they'd not endorse erroneous depictions showing the 'fun side' of circus life. The unknowing spectators would be mortified if they knew!! I encourage Lakeland and other corporations to look into such treatment, for if they became educated, their views would surely change. IF they have a conscience!! - Amy Thompson, Minnesota USA

Please show some thought about the message that your products send out. Children are impressionable, and while a trip to the circus can mean enjoying clowns & acrobats, it should not include animals who are kept in tiny enclosures, forced to perform and endure regular transportation. This is a horrible way for an animal to be made to live, so please think about what your products are portraying. The circus needs to evolve so that all it's participants are there of their own free will. At the moment this is not the case in all circuses, and your cookie cutters are representing the old standard that needs to change. - Sharon Thompson, United Kingdom

Oh dear Lakeland. As a regular customer I am very disappointed that you think this is acceptable. Please think again. It is not. - Louise Woollard, United Kingdom