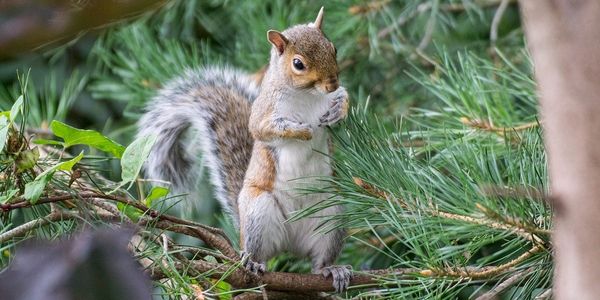 Politicians from the European Union have introduced a new law obliging the United Kingdom, Ireland and Italy to organise the killing of hundreds of thousands of grey squirrels, every year from 2016, using methods that include poisoning, bludgeoning to death or trapping and shooting [1].

This horrid and inhumane "programme" is to be sponsored from the money of taxpayers from all EU countries.

Killing squirrels is to be conducted even in the time of year when females nurse their dependent kittens. Killing thousands of nursing females will cause tens of thousands of baby squirrels starve to death over several days. Starving animals is a torture in breach of animal welfare standards of the World Organisation for Animal Health.

As with the badger cull there is no logic in the squirrel cull and the only beneficiaries of such "programs" are people in the commercial business of killing wild animals. Representatives of animal welfare organisations, like Mimi Bekhechi (director of PETA UK) and Andrew Tyler (director of Animal Aid), have stated many times that killing grey squirrels is an inhumane, ecologically and socially damaging practice, and is an absolutely pointless cruelty waged against beautiful animals.

Animal rights activists also draw attention to the fact that although scientific research has dispelled myths about grey squirrels [2a,b,c], those myths are still used and grey squirrels are being demonised by people and groups who benefit from killing wild animals, to "justify" the killing.

Rob Atkinson (the head of wildlife science at the RSPCA) condemned the killing of grey squirrels as pointless and ethically dubious. He rightly pointed out that until recently the problems alleged to be caused by grey squirrels were blamed on red squirrels who were then demonised to "justify" their killing.

Thank you for your valuable vote of support which helps save these beautiful creatures from cruel inhumane death.

Please join the FB page opposing the organisation of this massacre so that you can be informed about the day-to-day progress of the action.

[1] You can read about the ecological, financial and social damage which would be caused by mass killing of grey squirrels on this page.

The European Union introduced legislation obliging the United Kingdom, Republic of Ireland and Italy to implement from 2016 programmes of widespread culls of grey squirrels. For this reason in the UK alone there are plans to kill in 2016-2020 several hundred thousand of these beneficial [1] animals.

During the decision process for including grey squirrels in this legislation, significant ecological [1], financial [2] and social [3] damages which would be the result of widespread killing of grey squirrels were not considered.

Read the full text of the EU petition at: www.i-csrs.com/eu-petition

The regulation (EU) No 1143/2014 does not even allow for "protective periods" (*a) for nursing squirrel females which will cause that every year tens of thousands of nursing squirrel females will be killed and their young will die in imaginable suffering over several days–starving animals to death is a torture in breach of animal welfare standards of the World Organisation for Animal Health against animal torture [1].

Starving one animal to death is considered an inhumane act of cruelty. Torturing thousands of animals in this way cannot be called anything else than ecological crime.

The only beneficiaries of including grey squirrels on the "list of species to be eradicated" will be few owners of big commercial woodlands and a small group of companies and people killing wild animals for a living, such as grouse and pheasant shooting estates.

As citizens of countries belonging to the European Union we do not agree to conducting mass killing of grey squirrels financed with our taxes – paid by our member states into the common EU budget.

We petition for excluding grey squirrels (Sciurus carolinensis) from the "list of invasive alien species of Union concern" to be eradicated within the European Union ("the Union list", according to provisions of the Regulation (EU) No 1143/2014 of the European Parliament and of the Council), for the following reasons:

One of the EU priorities is to increase the forested area within its borders. Millions of euros are spent annually towards that goal.

Scientific research indicates that grey squirrels are the world's greatest natural forest regenerators (Steele et al. 1996, Goheen & Swihart 2003, ICSRS 2015a) responsible for planting tens of millions of trees a year. In the areas where their population declined as a result of ill-considered human activities the natural forest regeneration was threatened (Steele et al. 1996, ICSRS 2015a). During the preparation of the Regulation no studies were conducted to investigate the potential negative effect on natural forest regeneration of the eradication of grey squirrels in the areas that they inhabit often for over 150 years.

During the preparation of the regulation there were no studies conducted to investigate the potential negative effect of removing grey squirrels on threatened bird populations in a given area.

The alleged problems caused by grey squirrels in commercial woodlands has been for several years exaggerated, often by organisations and companies which profit financially from killing grey squirrels.

Many wild animals may sometimes damage trees. For many years effective methods to avoid such damage by appropriate forest management have been known. Those methods are much more economical (Forestry Commission 2006, ICSRS 2015b) and effective than cull programs because they don't need to be repeated (Taylor et al. 1968, Mountford 1999, Huxley 2003, Forestry Commission 2006, Harris et al. 2006, ICSRS 2015c).

Scientific research confirms that killing grey squirrels due to incidental tree damage is not only ineffective but also usually has the opposite effect than intended (Lawton & Rochford 1999, Forestry Commission 2006, Harris et al. 2006, ICSRS 2015c).

In the last 65 years in the UK several million grey squirrels have been killed while tens of millions of pounds have been spent towards that goal. After each such action not only did their population not decrease but it led to the expansion into new territories (Lawton & Rochford 1999, Harris et al. 2006, ICSRS 2015h) (*b).

Similarly flawed ‘reasons’ were given for programmes of widespread killing of red squirrels that were conducted for example in the UK, which resulted in significant decline of the species (Ritchie 1920, Middleton 1930, Shorten 1954, Harris et al. 2006, Lovegrove 2007, ICSRS 2015g).

Grey squirrels are a resilient species, able to live close to humans, often the only wild mammal species managing to survive in extensive urbanisation. For many people watching squirrels play is a profound source of enjoyment. In the majority of the areas in England, Wales, Ireland and in many parks in Italy the presence of grey squirrels is the only chance to encounter wildlife not damaged yet by human activity. In an increasingly impoverished natural world, it is crucial that young people in particular are able to experience nature meaningfully.

All social surveys done in the recent years point out that most people are vehemently against killing grey squirrels. This is important considering the demonization of grey squirrels and the wide-spread misinformation exaggerating the problems allegedly caused by grey squirrels that has been happening for decades.

In the UK alone in 2015 a social petition directed to the Forestry Commission was signed by nearly 150 thousand people voicing opposition to the introduction of another "program of grey squirrel cull".

If the program for biodiversity is not to result – like other programs so far in the last 65 years in the UK – in wasting millions of euros/pounds in public money – not counting the costs of ecological and social damages, grey squirrels must be excluded from "the Union list" of species for eradication. The current proposal of including grey squirrels on such list can only benefit a small minority of individuals and companies, mainly in the commercial industries of ‘killing wild animals’, such as shooting estates, which is surely an inappropriate allocation of taxpayers money.

(*a) None of the countries affected by the Regulation (EU) No 1143/2014 has implemented – nor has plans to implement – legal provisions to prevent the situation when young grey squirrels, completely dependent on their mothers and whose mother has been "eradicated", die in great suffering starving to death over several days. Starving animals to death is nothing else than torture against the standards of animal welfare of the World Organisation for Animal Health referred to in the Regulation (EU) No 1143/2014. This is the basis for the exclusion of grey squirrels from the "list of invasive alien species of Union concern".

(*b) Except for a small population on the island of Anglesey which is separated with a natural water barrier from the population living on the mainland UK.