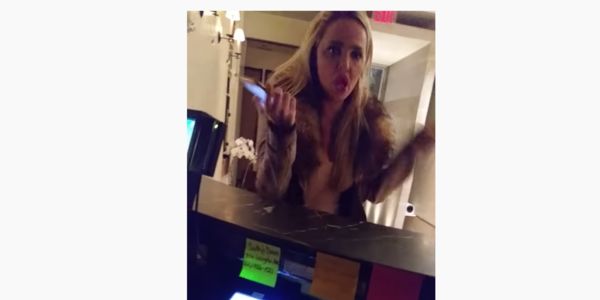 This Woman Called A Hotel Employee the N-Word, The Hotel Gave Her a Free Night's Stay

If you gasped at reading these words, just imagine how it must feel to hear them hurled at you. That's precisely what Linda Shell, who was a receptionist at City Club Hotel in New York City, had to deal with.

In a shocking video, Shell attempts to deal with a drunk and unruly guest who demands to be let in her room without having proper I.D. The guest, later identified as Michelle Rajacic, begins to argue with Shell to be let in. When she has no success, she unleashes a torrent of vile insults.

Shell says after Ms. Rajacic insulted her, the guest did the "lowest thing you can do to someone" and repeatedly spit in her face. Then she took her cell phone and broke it across the receptionist's face as she was escorted out of the hotel!

Rajacic was later arrested and convicted of third-degree assault. For her disgusting behavior and assault on one of their employees, one might think that City Club Hotel would have banned Rajacic for life. But according to a recent lawsuit filed by Shell, the hotel did just the opposite. When Rajacic was released from jail, the hotel gave her a free room!

Linda, who felt rightly betrayed by her employer, was so shocked she quit in disgust, choosing to lose her job rather than to continue working for a hotel that rewards racist abusers.

City Club Hotel made the wrong choice. They shamed their employee and apologized to the guest who was committed a crime in their establishment. Their actions are disgusting, and they should make it up to Ms. Shell by compensating the now-unemployed victim of Ms. Rajacic's common crimes and publicly apologizing to her. Sign the petition and demand that City Club Hotel right this wrong.
Sign Petition
SHAREShare this petition with friends!TWEETEMAILEMBED
Sign Petition
See more petitions:
You have JavaScript disabled. Without it, our site might not function properly.

Care2
This Woman Called A Hotel Employee the N-Word, The Hotel Gave Her a Free Night's Stay
SHARETWEET