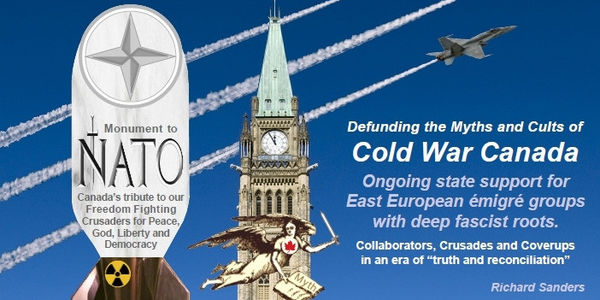 We call on the Canadian government to stop handing out financial support to right-wing East European lobby groups that whitewash their communities' historic complicity in the Holocaust and other crimes against humanity. As taxpayers we oppose our government's continued funding to the monuments, publications, events and meeting centres which are now used by these fascist-rooted groups to exalt the memory of their Nazi-collaborating founders, leaders and war heroes. (Click here to learn more.)

Government funding to groups that still revere their communities' fascist war heroes is an insult to the memory of Canadian troops who fought against the Axis powers in WWII. Continuing this state support is a betrayal of the stand taken by Canada and our Allies in the fight against fascism.
After centuries of financing programs of genocide against First Nations, and perpetrating other forms of systemic racism and abuse, the Canadian government is facing widespread public demands for truth and reconciliation. (Read more...)
In light of these calls for justice regarding Canada's role in genocide, the government should stop its funding of organizations that continue to whitewash and exalt racist, antisemitic and fascist war heroes who aided Nazi Germany's genocidal programs of political- and ethnic-cleansing. (See nine articles containing information about this ongoing government funding.)
This process will require the Canadian government to first acknowledge and account for its decades of support for East European émigré associations whose founders and leaders were top officials of Nazi puppet regimes, officers of the Waffen SS, or veterans of fascist guerrilla armies that allied with Germany during WWII. These groups represent the right-wing diaspora communities in Canada of Czech, Estonian, Latvian, Lithuanian, Slovak and Ukrainian heritage.) (Read an article summarizing this history.)
These far-right groups --- representing communities that deny their historic complicity in the Holocaust and other war crimes --- still benefit from millions of dollars in federal government support. These taxpayer-funded disbursements:
(a) support their publications and other media outlets,
(b) finance their events, including parades and festivals where racist/antisemitic/far-right leaders and movements are honoured, memorialized and revered,
(c) finance renovations to their cultural centres, where symbols, portraits and statues often venerate fascist statesmen, racist ideologues and Nazi-collaborating military commanders as if they were noble "freedom fighters."
The Canadian government is also bankrolling 80% of a controversial, $7.5-million monument in Ottawa. This memorial --- initiated, sponsored and organized by East European groups with deep roots in fascist movements --- is being used to venerate leading Nazi collaborators among its "Victims of Communism." For example, when the General Committee of United Croats of Canada donated to the monument they openly honoured such fascist Croatian leaders as Mile Budak, and Croatia's wartime dictator, Ante Pavelić. Having founded the fascist Ustaša, Pavelić ran Croatia as a Nazi puppet state. His Ustaša regime organized the genocidal mass murder of hundreds of thousands of Serbs, and at least 32,000 Jews and 25,000 Roma. (Read more here.)
Besides defunding all unrepentant fascist-rooted groups, the Canadian government should also:
(a) acknowledge its decades-long role in fostering these far-right groups in Canada,
(b) atoning for its efforts to shelter and protect any war criminals in their midst, and
(c) reconcile with communities that were victimized by the Canadian government's Cold War enthusiasm for US-style, McCarthyism.

Historical Context
Before and during WWII, the Canadian government (steeped in extremely antisemitic/antiSoviet ideologies) deliberately prevented the entry of most European refugees, especially Jews and antifascist activists, who were desperately trying to escape persecution by the Nazis;
Among the innocent Jewish and left-wing refugees who did manage to enter Canada during the WWII, at least 2,300 were interned behind barbed wire at army-run, Prisoner-of-War camps in four provinces throughout much of WWII;
Then, immediately after the war, despite strong opposition from the Canadian Jewish Congress and from antifascist Ukrainians and other leftwing groups, the government worked very hard to provide safe haven in Canada for many tens of thousands of Nazi sympathizers. These new Canadians included thousands of veterans of various Nazi Waffen SS divisions, and members of other fascist East European military formations that fought Canada's war-time allies;
Although obligated under international law to track down any Nazi war criminals hiding in Canada, the federal government and the RCMP refused to even investigate, let alone prosecute or extradite, new Canadians from Eastern Europe who were accused of war crimes, including participation in the Holocaust;
Throughout the Cold War, the Canadian government's allies within these fascist-linked émigré groups gave their enthusiastic public support for the McCarthyesque domestic policies that were promoted by both Liberal and Conservative governments; and
Since WWII, these Canadian émigré groups have continued to rally many within their communities to support the government's regressive foreign policies. In particular, these organizations have helped manufacture public consent for US-led wars, invasions, occupations, coups and other regime-change operations in the Third World. For example, Canada's fascist-linked émigré groups gave enthusiastic support for the government's strong commitment to supporting America's genocidal war in Vietnam, Laos and Cambodia where several million innocent people were killed during their anticolonialist struggle for independence.
Knowing this history is useful in understanding the rise of far-right groups, parties, movements and governments in Eastern Europe which are now feeding the escalation of dangerous tensions between NATO and Russia.
Some powerful advocates of these East European groups have also played a crucial role in influencing Canadian foreign policy elsewhere. For example, with regards to Latin America, former-Foreign Minister Chrystia Freeland (who has been deeply engaged with right-wing Ukrainian organizations for 30 years), took a leading role in The Lima Group. Through this multilateral, state network, the Canadian government has been working since 2017 to subvert, undermine and oust Venezuela's democratically-elected socialist government.
Click here to learn more

For more information on the specific, fascist-linked groups in Canada that continue to receive generous government funding, please access this publication online and/or order copies of this 64-page, full-colour research report. This document (Issue #70 of Press for Conversion! magazine) contains many detailed articles that carefully document this shameful, ongoing Canadian history....

Defunding the Myths and Cults of Cold War Canada:
Ongoing state support for East European émigré groups with deep fascist roots
(Collaborators, Crusades and Coverups in an era of "truth and reconciliation")