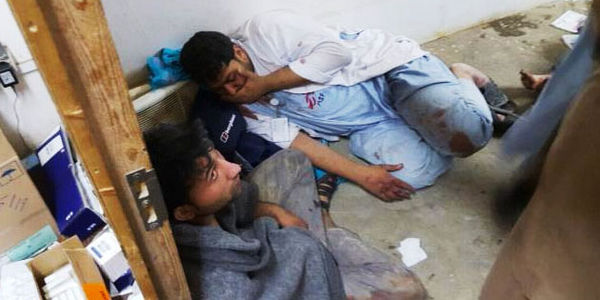 Email the UN to Demand an Independent Investigation Into the U.S. Bombing of A Doctors Without Borders Hospital!

It's absolutely sickening: On October 3, the U.S. bombed a Doctors Without Borders hospital in Kunduz, Afghanistan, killing 12 staff members and 11 patients - 3 of whom were children. At least 37 people were injured.

Please sign this petition to demand an independent investigation into the U.S. bombing of the Kunduz hospital. Your signature will automatically trigger an email to the UN High Commissioner for Human Rights.

“The bombs hit and then we heard the plane circle round,” says Heman Nagarathnam, who is in charge of Doctors Without Borders programs in northern Afghanistan. “There was a pause, and then more bombs hit. This happened again and again."

"When I made it out from the office, the main hospital building was engulfed in flames,” Nagarathnam said. “Those people that could had moved quickly to the building’s two bunkers to seek safety. But patients who were unable to escape burned to death as they lay in their beds.”

U.S. and Afghan military officials have given conflicting accounts of why and how the deadly bombing occurred. In an initial statement, a U.S. spokesperson disgustingly dismissed the killings as “collateral damage.” Another version of events was that the airstrike occurred in response to a Taliban threat against American forces nearby. And yet, Afghan officials said the hospital was holding Taliban fighters, which Médecins Sans Frontières (MSF), the French name for Doctors Without Borders, vehemently denies.

MSF has released a statement decrying the various, conflicting government accounts of how this bombing happened, and is loudly calling for an independent investigation: "There can be no justification for this horrible attack. With such constant discrepancies in the US and Afghan accounts of what happened, the need for a full transparent independent investigation is ever more critical."

Please sign this petition to demand an independent investigation into the U.S. bombing of the Kunduz hospital. Your signature will automatically trigger an email to the UN High Commissioner for Human Rights.
read petition letter ▾
I urge the Office of the High Commissioner for Human Rights to immediately launch an independent investigation of the US bombing of a Medecins Sans Frontieres Hospital in Kunduz, Afghanistan.
Sign Petition
SHAREShare this petition with friends!TWEETEMAILEMBED
Sign Petition
See more petitions:
You have JavaScript disabled. Without it, our site might not function properly.

Care2
Email the UN to Demand an Independent Investigation Into the U.S. Bombing of A Doctors Without Borders Hospital!
SHARETWEET