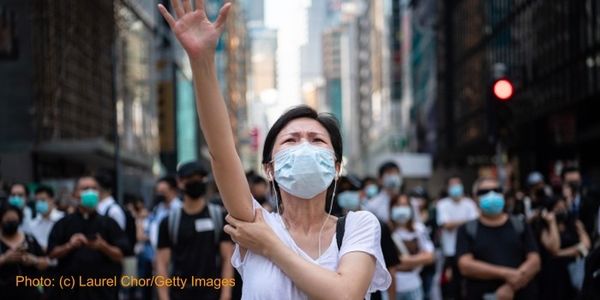 Stop the Crackdowns on Freedoms in Hong Kong

The Chinese authorities are proposing a security law in Hong Kong that could pose a grave danger for the rights of people in Hong Kong. Take action now and stop the national security law.

In 2019, the Hong Kong government dropped a controversial extradition bill after months of protest involving millions in Hong Kong. Now, the Chinese government is proposing a national security law that poses a grave risk to human rights in Hong Kong. China routinely targets human rights defenders and activists under the pretext of "national security". In China that can often mean unfair trials, secret detention and no access to lawyers.

Since protests began last year, police have used unnecessary and excessive force to silence demonstrators. They have used tear gas and batons against the largely peaceful protesters and have arrested many on vague charges. Now, as people are forced once more to protest to protect everyone's rights, they yet again have to face danger.

We are calling for the Chinese authorities to stop their plans to impose the national security law on Hong Kong. Until the authorities can ensure that the proposed legal changes would meet human rights law and standards in all aspects, this will remain our call.

Note: when you take action, an email will be sent to the government of Hong Kong including the email address you provide. Other details you provide such as your name and country will be processed in line with Amnesty International's privacy policy.

I am writing to express my grave concern that the Hong Kong authorities are using aggressive policing against protesters when they consider the protests are crossing the "red-line" set by the Beijing government, including advocating for democracy, challenging the Chinese government or endangering "national sovereignty and security", even when the approach to policing violates international human rights laws and standards.

Amnesty International has documented unnecessary and excessive use of force by police on largely peaceful protesters, arbitrary arrests and retaliatory violence against arrested persons in custody, as well as police's inaction when protesters were facing violent attacks by counter-protesters and other people, both in the pro-democracy Umbrella Movement in 2014, the Extradition Bill protests starting from April 2019 and in between. Police frequently use the Public Order Ordinance to ban or place unreasonable limits on peaceful protests, and use vague charges related to "unlawful assembly" or "unauthorized assembly" under the law to arrest, harass and prosecute peaceful protesters. There is a grave concern about the lack of accountability for police's unlawful use of force and other abuses in protests.

I urge you to immediately take necessary measures to establish a fully independent mechanism mandated to effectively conduct investigations into inappropriate use of force or other abuse by police, and respect and ensure people's human rights to freedom of expression, association and peaceful assembly.

Care2
Stop the Crackdowns on Freedoms in Hong Kong
SHARETWEET