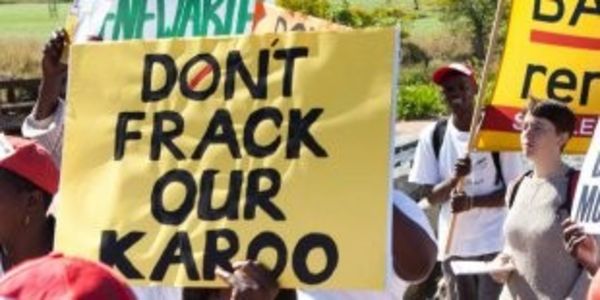 Demand and end to fracking in Kgalagadi Transfrontier Park in Botswana

The Botswana government has sold the rights to frack for shale gas in one of Africa’s largest protected conservation zones to a UK-based oil company Karoo Energy. Fracking in Kgalagadi Transfrontier Park will impact the environment, and bring health risks and a loss of huge amounts of water to an area already struggling with clean water shortages. Please sign this petition to ask the government not to allow fracking in the national park, and to demand that Karoo Energy withdraw from their plans to frack there.

Over half of the Kgalagadi Transfrontier Park is ready for lease to gas mining companies from across the world. If the Botswanan Government continues to provide licenses and leases for exploration and drilling, the country's human and animal population will suffer tremendously from habitat loss, water scarcity, water pollution, environmental degradation, soil pollution, and the host of conditions, disorders, illnesses and diseases that come hand-in-hand with water and food supplies being devastated by local fracking wells.

The Government of Botswana granted fracking licenses to Karoo Energy in secret without disclosing any information about the potential drilling licenses to Park Officials or Wildlife Scientists, both of whom are terribly concerned about the almost certain negative effects that will be felt as a result of fracking for shale gas.

Please sign this petition and urge Botswanan President Ian Khama to repeal the licenses granted for exploratory drilling in the Kgalagadi Transfrontier Park, and to demand Karoo Energy cease their plans to frack in the national park.

Fracking in Botswana in more detail:

Hydraulic Fracturing or "Fracking" is the process of drilling and injecting fluid into the ground at a high pressure in order to fracture shale rocks to release natural gas inside.

For every "Fracking" job, an estimated 1-8 Million gallons of fresh water are used. Every Well can be "fracked" approx 18 times. That means hundreds of millions of gallons of water will be wasted in Botswana for every SINGLE well. Botswana is an area that is already desperately effected by limited access to clean water.

For every job, an estimated 40,000 gallons of chemicals are pumped deep into the ground (about 10,000 ft.) to extract hydrocarbons. Approximately 600 different chemicals are used including known carcinogens and chemicals with high toxicity levels (the chemical recipes are often protected by IP rights allowing companies to keep secret exactly what chemicals and how much of them they use). These chemicals often end up making there way into local water supplies causing incrementally more polluted reserves and has been known to even cause household tap water to become flammable - yes that is right, the supposed safe-to-drink water running from the tap, can be ignited with a flame. The flowback liquid, the water-chemical concoction pumped back to the surface after the shale rock is fractured, contains water and a number of contaminants, including radioactive material, heavy metals, hydrocarbons and other toxins. This "Flowback" or waste-water, is often then stored in pits where its lingering VOCs are spread through the atmosphere or its pumped back into the ground into a deep underground well (do I really need to point out the problems with an deep underground well acting as a hazardous waste disposal pit?)
So, let's do the math!

Estimates taken from Fracking sites in the USA suggest that Methane concentrations are 17% higher in drinking water wells near fracking sites.

In the end, Botswana will be wasting billions of gallons of the most valuable resource on Earth - Water, in order to claim natural gas yields that pale in comparison to the amount of inputs.

Some compelling facts about fracking:

- Researchers from Duke University tested drinking water at 60 sites throughout Pennsylvania and New York; their research was published in 2011 in the Proceedings of the National Academy of Sciences. The researchers found that drinking water near fracking wells had levels of methane that "fell squarely within a range that the U.S. Department of Interior says is dangerous and requires urgent 'hazard mitigation' action," ProPublica reports.

- In 2012, researchers from the Colorado School of Public Health released a study showing that air pollution caused by fracking could contribute to immediate and long-term health problems for people living near fracking sites.

- Research by over 150 studies suggests that chemicals released during natural gas extraction may harm human reproduction and development.

- Many areas of the United States not considered earthquake-prone, such as Ohio and Oklahoma, are now experiencing relatively strong seismic activity. Fracking is believed to be the cause of Oklahoma's strongest recorded quake in 2011 and more than 180 tremors in Texas between 2008 and 2009.