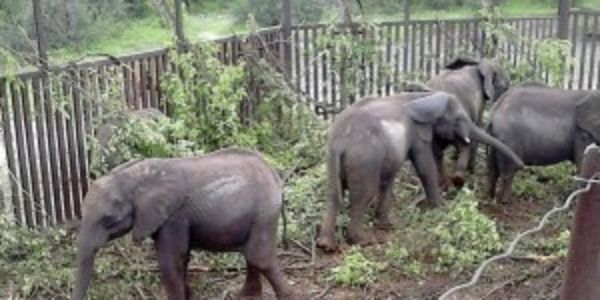 Despite the world's outrage about the 27 kidnapped baby elephants two years ago, CITES without hesitation, gave the permits to Zimbabwe to export these helpless babies who still needed their mother and family! Later another five young calves where stolen from their families. These captures were kept as secret as possible. But there is an undercover footage about how they were captured and treated when loaded into the trailer. A young female calf was repeatedly kicked on the head, because she didn't understand, what she was expected to do. One minute you are free, protected by and cared for, by your family, the other moment you are sedated, seperated for ever from your family and captured for a cruel unknown future far away. The elephants are kept together in a holding pen until they are tamed and ready to be shipped to China. So many scientists have spoken out against this behavior and have explained how traumatic this seperation is for the herd and the babies! The welfare of the little elephants is neglected as well, photos of them in Chinese hands have shown how skinny, lifeless, apathic and wounded they were! CITES does nothing to prevend this crime! As a matter of fact they will be willing to give another 200 permits to export more baby elephants from Zimbabwe to China! Isn't it enough that the elephant population is decreasing dramatically that they yet are being stolen and shipped to a foreign country with the permission of an organisation that should be in the first place be there to protect them as they are facing extinction in Africa within a decade? The citizens of the world don't agree with this and will show this by signing yet another petition!
We want an investigation towards this wildlife crime on the highest level now!!

Durban - In the last two years, China has imported more than 80 live Asian elephants from across its border in Laos and almost 100 juvenile African elephants from Zimbabwe. They were all destined for zoos throughout China. According to wildlife investigator and film-maker, Karl Ammann, the Laotian Prime Minister last year publicly declared the trade in live elephants illegal under national laws. Furthermore, says Ammann, the transactions should not have been possible under the Convention in the Trade of Wild Fauna and Flora (CITES). Asian elephants are considered a species threatened with extinction (Appendix I) meaning that commercial trade in Asian elephants is prohibited unless the elephants are 'leased' for non-commercial purposes or they originate from a CITES-approved facility of captive-bred animals. According to Ammann, Laos does not have a single CITES-approved breeding facility. Zimbabwe's elephants, are listed under Appendix II. This means that trade is allowed, provided the Zimbabwean authorities do not deem it "detrimental to the survival of the species" and that they are "satisfied the animals are legally obtained". There is no mention in the CITES regulations on the welfare or the ecological issues that may arise from snatching juvenile elephants from their family herds in the wild. What's more, Zimbabwe alone determines whether the trade is detrimental or whether they are legally obtained. There aren't any independent checks from the international community or CITES. In 2016, China officially imported 50 live elephants from Laos, as stated by the CITES trade database, while Ammann's undercover interviews with elephant handlers – or mahouts – on the China-Laotian border revealed a further 30 went in 2017. Laos, however, has no record of the corresponding exports. "The assumption then," says Ammann, "has to be that a lot of these imports and exports were done without the requisite CITES import and export permits." According to a CITES-lead investigation last year, "information was made available to the Secretariat suggesting the possible leasing of domesticated Asian elephants to China without CITES documentation." Leasing of domestic Asian elephants for non-commercial purposes is authorized by CITES, provided permits for their export and import are provided. The 'leases', however, are anything but non-commercial. Ammann discovered that some zoos have paid Chinese middlemen up to 10 times as much as the latter paid owners in Laos. So-called captive elephants in Laos sell for about R390 000 before being walked across the border into China. Thereafter they are transported to receiving facilities, which buy them from the agents for up to R3,9 million per animal. "That is a nice mark-up," Ammann said, "and makes it exactly the kind of commercial transaction which under CITES rules is not acceptable." CITES has been slow to react, and when it has, the reaction has been ineffective. In July 2016, the CITES Secretariat noted "gaps in implementation" and recommended that Laos "improve its compliance ability and law enforcement of illegal wild animal and plant trafficking." In July the following year, A CITES Technical Committee visited Laos to investigate the trade in live elephants, among others. Its findings were presented at the 69th Meeting of the CITES Standing Committee in Geneva in November last year. The report found that the trade in live elephants was indeed illegal, stating further that "it is understood that the international movement of some elephants… occurred in contravention of the national legislation of Laos and CITES provisions." But, while the Standing Committee called on Laos to improve implementation combating the illegal trade in animals and plants in other areas or face a trade suspension, no such recommendation was made with regards to the trade in live elephants. While Laos and Zimbabwe seem to be getting all of the attention, Ammann believes that China also needs to be held accountable, if not more so. "China has been on the front lines of importing iconic live species from rhinos to killer whales, elephants and recently 150 chimps – all totally illegal. Article VIII of the convention dictates that parties involved in the illegal import be prosecuted, the animals in question confiscated and, if possible, repatriated. But this does not seem to apply to China," he says. Sebastian Korwin, Legal and Policy Advisor for the David Shepherd Wildlife Foundation, says the equity of the CITES decision-making process needs to be called into question. "There was a serious risk during the Standing Committee meeting," he said, "that poorly-funded developing countries were unable to fully engage and that important decisions were made by a select few. The live elephant trade to China is a particular example of the lack of equity at CITES. Elephants are a popular attraction at Chinese circuses and zoos and in some places they are still expected to perform. Conditions are usually poor, with the elephants often chained and confined in small concrete enclosures. CITES, though, allows China to determine whether the facility receiving imported elephants is suitably equipped to house and care for them. There is no requirement for outside, independent assessment. "The double standard at CITES, therefore, benefit the more powerful and well-resourced countries," says Korwin, "this includes China and not the weaker countries, such as Laos."

second part of petition text is courtesy of: the conservation action trust