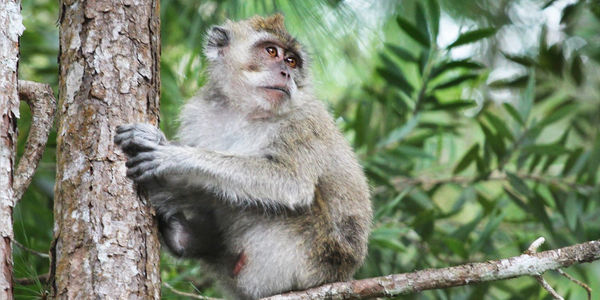 Biosphere Trading is a company at Closel in Tamarin Falls, Mauritius, that breeds and exports non-human primates for vivisection. It is seeking to expand and increase its current capacity of 800 monkeys to 7,500 monkeys. The company is also seeking permission to capture monkeys from the wild, and aims to start exporting 1,500 monkeys per year.

Action for Primates and Progress Science Mauritius/NO Animal Experiments are appealing to the Mauritius government to 1) deny the application by Biosphere to expand its facility and 2) refuse permission to allow the capture of wild monkeys.

Capturing and removing non-human primates from their native habitat and family and social groups is cruel and inflicts substantial suffering and distress, including injuries and death. Holding and transportation add to this as the monkeys are shipped on long journeys around the world in the cargo holds of aeroplanes. Several official bodies and non-human primate organisations acknowledge the inhumanity of this situation. For example, the International Primatological Society (IPS) states:

"...the capture of nonhuman primates from the wild is stressful for the animals and increases the suffering, risk of injuries, spread of disease and even death during capture, storage and transport" (IPS. 2020. Trade in Primates Captured in the Wild)

Mauritius is one of the world's largest exporters of non-human primates for the global vivisection industry. Tens of thousands of macaques are kept captive in breeding farms across the country. They spend their lives behind bars, on bare concrete, deprived of the lush foliage of their jungle home that is all around them. In 2019, the five Mauritius companies involved in this brutal trade shipped thousands of individuals to laboratories in the USA, Canada, France, the UK, Spain, Germany and the Netherlands. This cruel business, that inflicts so much suffering and distress, is reportedly worth over one billion rupees a year.

Globally, the long-tailed macaque is the most widely used non-human primate species in research, mainly in regulatory toxicity (poisoning) testing. This is done primarily for the purpose of developing commercial products for people. While restrained, often severely, test drugs are forced into their bodies (injections, stomach tube, aerosol). The drugs often cause vomiting, seizures, weight loss, internal bleeding, organ failure and even death.

In addition to the substantial suffering and stress inflicted on monkeys, there are major issues concerning the scientific validity of animal toxicity tests. Results in the monkeys, especially in a laboratory setting, cannot be reliably and safely extrapolated to people.

There are many alternatives to using non-human primates in research and toxicity testing. These alternatives have been shown to provide reliable and predictive information for the human condition, and include human cell, tissue and organ cultures, microdosing and computer models.