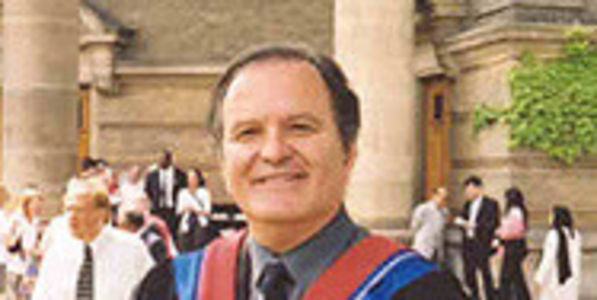 We the undersigned, DEMAND that Dr. Jerry Tenenbaum having crippled Dezrin Carby-Samuels through medical malpractice, now enable her to get access to seeing her son that she has been prevented from doing so because of Dr. Tenenbaum's entourage

It was the summer of 2014. Raymond, Dezrin's son was getting extremely frustrated at the rapid deterioration of his Mom's health. For over a long time, she was being subjected to continued “tests” under the auspices of Dr. Jerry Tenenbaum, her “primary care physician”. But not one of these tests were leading to any kind of treatment option to either reverse of stabilize Dezrin's condition.

When Raymond drove Dezrin to see Dr Lisa Fischer for her speech therapy appointments in downtown Ottawa,. Raymond began to notice that his Mom, Dezrin was beginning to have severe difficulty walking. Alarmed and frustrated by Dr. Tenenbaum's apparent callous disregard in getting any closer to prescribing actual treatment, Raymond found Dr. Shahram Ayoubzadeh. He's a naturopath doctor who was schooled in traditional medicine, who enjoyed universally positive ratings and high regard by his former patients as revealed, in part, by those reviews published in RateMDS. This was in sharp contrast from widespread negative reviews by Dr. Jerry Tenenbaum which included observations about his “lack of empathy”, rude comments to patients they they were “fat”, even though he was not exactly skinny. But very notably, other patients also described reports of his failure to prescribe treatment options after lengthy tests. Raymond had shown this comments to Dezrin, his Mom.

Thankfully, Dezrin within less than a month of seeing Dr. Shahram Ayoubzadeh, was, not only was walking much better, she could even run, if she wanted to, in future visits that Raymond brought Dezrin to see Dr. Fischer.

Raymond was happy. But not everyone was happy at Dezrin's progress. This apparently included Dr. Jerry Tenenbaum. Furious that a naturopath doctor was exposing the failure of his medical practice, Dr. Tenenbaum got his Marcella, his daughter-in-law, on a trip from Sweden to Ottawa during Christmas break in 2014 to demand that Dezrin stop seeing Dr. Shahram Ayoubzadeh, and to resume further tests with Dr. Jerry Tenenbaum. Predictably, Dezrin's health soon after, began to decline again.

It began to become evident to Raymond that his Mom was being used to as a “data specimen” and human guinea pig to support Dr. Tenenbaum's University of Toronto and Mount Sinai Hospital in Toronto based research on Rheumatology and Geriatrics, and that Dezrin ought to expect no progress on her health from Dr. Jerry Tenenbaum.

Through Marcella, his daughter-in-law, Dr. Jerry Tenenbaum and his entourage starting on 8 January 2015, began making a series of phony phone calls to the Ottawa Police complaining that Raymond who has been the primary care-giver for Dezrin, was “suffering from mental illness”; was “holding Dezrin hostage”, and was “creating domestic disturbances”. The goal of series of phone calls to the police that were made starting from 8 January 2015 to 18 April 2015 were to ideally have Raymond arrested on fabricated charges, or at least get him “out-of-the-way” of trying to help his Mom.

In late April 2015, in reaction to a campaign of deceit and deception by Dr. Jerry Tenenbaum and his entourage, Raymond was barred by Police from having any further visitation access to his Mom, against his own Mom's wishes. Raymond presented a note written from his Mom that she was being subject to abuse, but Dr. Jerry Tenenbaum's entourage got the police to ignore that note.

Raymond did not get to see his Mom until he hired a lawyer who arranged for Dezrin to come to the Nepean, Rideau and Osgoode Community Resource Centre in Ottawa on Friday, 12 June 2015.

Raymond was shocked when he saw his Mom. Under the auspices of Dr. Tenenbaum's ongoing apparent medical incompetence and malpractice, Dezrin within a few weeks, lost the abilities to walk, write and talk. Ms. Alison Timons revealed how Dr. Tenenbaum's entourage had blocked them having any social support access and could not attend to Dezrin's needs. They said that it was apparent that Dr. Jerry Tenenbaum's entourage was lying when it was claimed that Dezrin did not want them there.

Raymond cooked for Dezrin and got her the vitamin and mineral supplements that had been endorsed by medical practitioners. However, having been barred from seeing his Mom by the macabre activities of Dr. Jerry Tenenbaum's entourage, Dezrin's health declined. One neighbour had visited her and said she saw her without apparent access to food other than junk food in the house, and that she looked neglected and in disarray in a very messy house.

The Nepean, Rideau and Osgoode Resource Centre offered on Friday, 12 June 2015, to testify in Court against Dr. Jerry Tenenbaum's entourage. Raymond revealed this development to Detective Robert Griffin Jr. before Raymond found out that this cop had actually been hired by Dr. Jerry Tenenbaum's entourage to thwart any further access by Raymond and his Mom seeing each other.

Dezrin could no longer speak when Raymond saw her on 12 June 2105. But she still had her mind in tact. Raymond asked her if she wanted him to help her get better. Dezrin nodded less. Raymond cried for the better part of three days straight after seeing the condition of his Mom.

This story would have ended here with Raymond seeing his Mom on a regular basis and getting her the treatment that she wanted and had been getting before from Dr. Shahram Ayoubzadeh. Raymond had been hopeful that with a timely response, he could get far more competent medical practitioners to get his Mom's voice back, and also walking and writing. Raymond has noted the comments of a former patient of Dr. Tenenbaum online who had said that he had almost become crippled by Dr. Tenenbaum until he saw a different doctor and now he can actually dance.

However, Dr. Jerry Tenenbaum's entourage wouldn't have it. Reacting quickly, Dr. Tenenbaum's entourage sent Detective Robert Griffin Jr on the Monday, 15 June 2015 to threaten social workers at the Nepean, Rideau and Osgoode Resource Centre to cease and desist further communications with Raymond, which they complied with, sending a letter to Raymond that same day to that effect.

Dr. Jerry Tenenbaum's entourage then use their dirty cop in an ongoing campaign of harassment against Raymond's efforts to get help for his Mom and find out the status of her health.

This harassment involved threatening visitations at Raymond's place of residence and even threatening text messages and phone calls – posted on YouTube, as evidence. In once incident Dr. Tenenbaum's entourage sent the cop they hired late at night to incessantly bang Raymond's door in the summer of 2015 for over 30 minutes uttering threats. He was apparently dressed in plain clothes, and the Ottawa Police revealed that he was officially off-duty. This cop hired by Dr. Tenenbaum's entourage repeatedly threatened to charge Raymond with “criminal harassment” if he continued to try to see his Mom or inform friend and extended family members about the activities of this dirty cop. Robert Griffin Jr. very specifically called Dr. Jerry Tenenbaum's name, as his “puppet master”.

And this was all apparently a part of an effort to prevent Raymond using a naturopathic doctor and other far more reputable traditional doctors to assist Dezrin, that would expose the profound negligence and apparent medical malpractice of Dr. Jerry Tenenbaum.

It was only weeks after Raymond had launched formal civil litigation did the harassment by Dr. Jerry Tenenbaum's entourage hired dirty cop.

But, finally, there appeared to be light at the end of the tunnel in relationship to Raymond's long struggle to defend his Mom's health. Through a Default Judgment, Ontario Superior Court Justice Patrick Smith saw through the mischievous activities of Dr. Jerry Tenenbaum's entourage, and ordered on 11 February 2016 that Raymond and his Mom, now is worse health, to have daily access to seeing each other.

But, as this VIDEO reveals. Mr. Jerry Tenenbaum's entourage through John Summers, a lawyer they hired, refused to respect this Order and continue to manipulate court procedure to unethically block Raymond and his Mom having access to each other, irrespective of the on-gong trauma it has caused Dezrin who has not seen her son in well over a year along with Raymond's own trauma.

Actually, one doctor at the Appletree Medical Centre attributes the forcible separation of Dezrin from Raymond that was initiated by Dr. Tenenbaum's entourage as substantively triggering her decline in health associated with her no longer being able to walk, talk and write that was also caused from the apparent negligence, neglect and abuse of Dezrin all under Dr. Jerry Tenenbaum's auspices.

Dezrin Carby-Samuels like other Canadians expected that when she chose to see a doctor that he or she would do what they can to try to make them better – inspired by the Hippocratic Oath. This Oath is Greek in Origins and has traditionally been taken by doctors to swear or affirm a pledge to protect the health and life of any patient to the best of their abilities and not to willfully do harm to a patient.

However, rather than make Dezrin better, Dr. Jerry Tenenbaum and his entourage made her worse. When Raymond. Dezrin's son, sought to intervene to seek to make his Mom better, and reported his malpractice to medical authorities, Dr. Tenenbaum and his entourage maliciously blocked Raymond – who Dezrin wanted to see. Raymond had stood by her side as her primary at-home care giver.

Dezrin who had wanted further speech therapy that was recommended by Dr. Lisa Fischer, but was blocked from being able to access that speech therapy under the auspices of Dr. Jerry Tenenbaum who has been described by Marcella, his daughter-in-law as Dezrin's “primary healthcare physician”.

How can Dr. Jerry Tenenbaum as a Jewish Holocaust survivor show such an apparent lack of empathy and regard to the plight and suffering of others including notably Dezrin, and also Raymond?

This petition is an appeal to all Canadians and fellow human beings in general to DEMAND that Dr. Jerry Tenenbaum and his entourage that has blocked visitation access to IMMEDIATELY enable the RE-UNITING of Dezrin Carby-Samuels with her son Raymond and to further DEMAND that Dr. Jerry Tenenbaum take responsibility for his substantive role in crippling Dezrin – she is now reportedly severely physically incapacitated.

Care2
We the undersigned, DEMAND that Dr. Jerry Tenenbaum having crippled Dezrin Carby-Samuels through medical malpractice, now enable her to get access to seeing her son that she has been prevented from doing so because of Dr. Tenenbaum's entourage
SHARETWEET