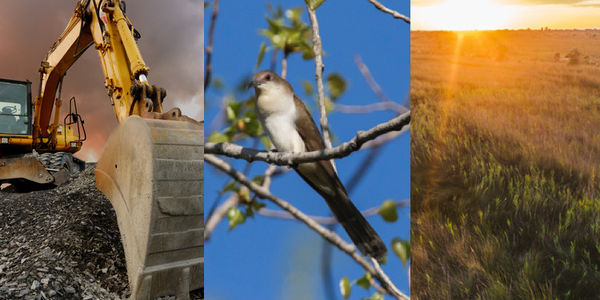 This 8,000-year-old prairie is about to be destroyed, spelling death for birds

When you think about precious ecosystems, you probably think about rainforests, mountaintops, or even swamplands. But how often have you considered the prairie? As it happens, the midwestern prairies in Illinois are extremely crucial to the environment and many species of wildlife -- but it's under attack. And one of the very last parcels of this rich land is about to be destroyed by an airport just outside Chicago.

Sign the petition to demand the Chicago Rockford International Airport save the prairie before it's erased permanently!

Right now, the airport is planning to raze a huge area that's about 280-acres large in order to expand their operations. Within this 280 acres is a small, rare patch of prairie that's just five acres big -- and it's set to be swept up in the demolition, too.

Known as the Bell Bowl Prairie, it's thousands of years old, and still retains the imprint left by the continent's last glaciers when they retreated upwards of 8,000 years ago.

This ancient area has been preserved so far due to the management efforts of the Natural Land Institute. Today, Bell Bowl Prairie is filled with wildlife, including multiple species of migratory birds who are already at risk of endangerment due to climate change and human development in other regions. No local environmental or conservation organizations were involved in or even notified about the prairie's impending destruction. Instead, apparently the state government just decided to let the airport do whatever it wanted.

But the airport doesn't have to wreck birds' paradise in order to have more commerce. The San Francisco International Airport (SFO), a huge transit hub outside a major city, has recently made headlines for its efforts to preserve a similarly rare, special wild area within the airport's bounds. Instead of building on that land, the SFO airport has actually employed staff to make sure the wildlife area remains untouched. Their one exception is to ensure the parcel of land remains abundant with all the native plant species that local wild animals need.

If SFO can do it, then clearly the Rockford Airport can, too. Demand that Board Chairman Paul R. Cicero show he's a good steward of the land by working with local environmentalists to protect the ancient Bell Bowl Prairie for all time!
firma la petición
COMPARTIRcompartir con mis amigos de FacebookTWEETE-MAILINSERTAR
firma la petición
Ver más peticiones:
Has deshabilitado JavaScript. Sin este programa, puede que nuestro sitio no funcione debidamente.

Care2
This 8,000-year-old prairie is about to be destroyed, spelling death for birds
COMPARTIRTWEET