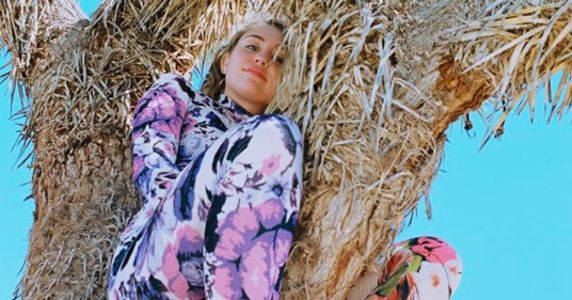 When Trump idiotically shut down the government at the end of 2018, it wasn't just government employees and contractors whose livelihoods were thrown in disarray — many of our national parks were also left in shambles.

Perhaps no park incurred more damage than Joshua Tree National Park in Southern California. The shutdown furloughed key staff and left the park open to rampant vandalism. Visitors disregarded trail signs, trampled over sensitive areas and even knocked over several iconic trees to make way for illegal off-roading vehicles. According to experts, in just 35 days, vandals and unpoliced visitors caused so much damage that the park would take up to 300 years to recover.

Now on the heels of that report comes news that pop star and social media influencer Miley Cyrus visited the park. Not to bring awareness to the endangered tree's plight, but to further damage it. And she did it all for the 'gram. Earlier this week, she donned a floral bodysuit, climbed up one of the protected trees and posted it on her Instagram to her 90 million followers with the caption: "Looking down at all the petty drama like...."

Perhaps the "drama" was self created. Within minutes of the upload, many of her fans dragged the singer for her carelessness. Not only could she have damaged one of the protected trees, but as an influencer, her post could easily encourage others to do the same thing — leaving Joshua Tree at the mercy of the masses.

The influx of copycat Instagram influencers vying for their perfect "Miley shot" in the park is something the yucca brevifolia cannot endure. Experts already warn that the plant's population is dwindling and fear that by the end of the 21st century, their range could shrink by 90%.


Instagram, the widely popular social media platform, has allowed over a billion people to see the world from another person's perspective. But it has also created the "Influencer," Instagramers with thousands or millions of followers who travel the world searching for the perfect shot to upload for their fans. While sometimes this is harmless, the trend can also do serious damage. Take the California poppy "superbloom" currently taking place in the Temescal Mountains for example. In early March a few influencers posted photos of themselves surrounded by bright orange flowers and within weeks, hundreds of thousands of people were invading the area to do the same. The influx of people has left the area in ruins.

One influencer post can make or break businesses and it can do the same when it comes to our natural world. The followed and the famous must act responsibly when sharing content with their fans because one simple photo could encourage thousands to follow in their footsteps, with serious consequences.

Miley Cyrus should take down her irresponsible post, apologize to her fans and the National Park Service and make a donation to a Joshua Tree conservation organization.